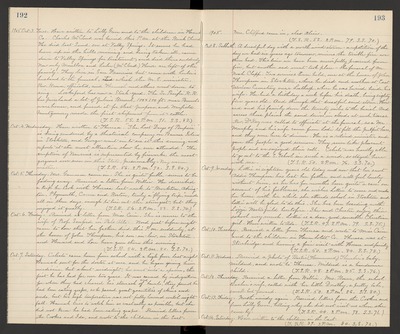 1905. Oct. 3. Tues. Have written to Lilly Greve and to the children in Hannah Co. Charles McCloud was buried this P.M. at the Brick Church He died last Sund. eve at Valley Springs. It seems he had been up in the hills mining and being taken ill, came down to Valley Springs for treatment, and died there suddenly. Now only Moulton and Lulu (McCloud) Howe are left of the family. They live in San Francisco but came with Lulu's husband to the funeral, which the M.E. minister, Rev. Brown, officiated, and Hannah and others went down to sing. Lockeford has now a Stock-yard. The So. Pacific R.R. has purchased a lot of Julius Bruml, 100x100 ft. near Bruml's warehouse, and fenced it for that purpose, and Winfield Montgomery made the first shipment from it - cattle. (T.S.R. 55. 2 P.M. 91. S.S. 83.)

Oct. 4. Wednesday. Have written to Theresa. "The Last Days of Pompiri" is being rendered by a theatrical company on Banner Island in Stockton, and George went in to see it this evening, and reports it the most attractive show he ever attended. The eruption of Vesuvins is represented by fireworks, the most gorgeous ever seen in this State, presumably. Very warm weather. (T.S.R. 56. 2 P.M. 92. S.S. 84.)

Oct. 5. Thursday. Mrs. Gammon came in. She is quite feeble - seems to be fading away. Received a letter from Willie. He described a trip he took with Theresa last week to Brockton, Abington, Plymouth, Carver and Boston, truly a "flying trip," made all in three days, enough to tire out the strongest, but they enjoyed it greatly. (T.S.R. 56. 2 P.M. 83. S.S. 74.)

Oct. 6. Friday. Received a letter from Miss Cain. She is nurse to the wife of Prof. Sanford in Palo Alto. Word just before night came to Lou that her father died this P.M. suddenly, at the house of John Thompson, his son-in-law, in Stockton, and Howard and Lou have gone there this evening. (T.S.R. 54. 2 P.M. 80. S.S. 72.)

Oct. 7. Saturday. Celeste came home from school with a high fever last night Hannah sent for the doctor at once and he began giving him medicine, but about midnight, he went into a spasm, the first he has had for over two years. It was caused by indigestion for when they had cleared his stomach and bowels, they found he had been eating grapes, as he passed great quantities of skins and seeds, but his high temperature was not fully lowered until nightfall. Hannah tries to watch him as constantly as possible, but she did not know he had been eating grapes. Received letters from the Cookes and Ida, and wrote to the children in the East.

Oct. 8. Sabbath. A dreadful day with a north wind-storm - a repetition of the day we had six years ago tomorrow, minus the terrible fire we then had. This time we have been mercifully preserved from fire, but another sad event took place - the funeral of Mr. Noah Clapp. Two services were held, one at the house of John Thompson in Stockton, where he died and another at East Union Cemetery near Lathrop, where he was buried beside his wife. He had a birthday a week before his death, being eighty five years old. And through that dreadful sand-storm, Howard and his family drove the twenty miles to the burial. And across those plains the sand drives in clouds at such times. Rev. DeKay was called to officiate at the funeral, so a Mr. Murphy and his wife came from Lodi to fill the pulpit here, and they were here to dinner. He is retired minister and gave the people a good sermon. They seem like pleasant people and we enjoyed their call. Celeste was hardly able to go out to the S. School in such a wind, so stayed here with me. (T.S.R. 50. 2 P.M. 76. S.S. 70.)

Oct. 9. Monday. Lottie is eighteen years old today and now that her aunt Addie Thompson has lost her father and will feel lonely without him, as he has months been quite a care on account of his feebleness, she wishes Lottie to come and make her home with her while she attends school in Stockton and Lottie will be glad to do this. She has been boarding with Lizzie Westerfield heretofore. She and Chester enjoy their school very much. Lottie is a dear, good, sensible Christian girl. Have written to Ada. (T.S.R. 47. 2 P.M. 79. S.S. 75.)