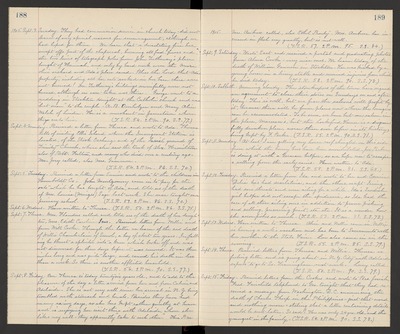 1905. Sept. 3. Sunday. They had communion service in church today - did not learn of any special reasons for encouragement, although we had hoped for them. We learn that a devastating fire has swept off a part of the chaparral, burning all feed, fences and the two lines of telegraph poles from John Tutheway's place bought of Hannah, and only by hard work were the Moore olive orchard and Ada's place saved. Bless the Lord that Ada's property, including all her oats sacked in her barn there were not burned! Mr. Tutheway's buildings mercifully were not burned, although no care-taker was there. George went to a wedding in Stockton tonight at the Catholic church and was "best man" to the couple - A.B. Overholzer and Mary Alice Walsh of Linden. He is a merchant in Jamestown where they are to live. (T.S.R. 54. 2 P.M. 90. S.S. 77.)

Sept. 4. Monday. Received a letter from Theresa and wrote to Ada. Theresa tells of visiting Ellis Island where the Immigrant Station is located, of the Stock Exchange and of the burial ground of Trinity Church, where she saw the tomb of Alex. Hamilton also or Robt. Fulton, and many who died over a century ago. Mr. Jory called, also Mrs. Gammon. (T.S.R. 54. 2 P.M. 86. S.S. 70.)

Sept. 5. Tuesday. Received a letter from Eunice and wrote to the children in Humboldt Co. John Montgomery came in to pay for the oats which he has bought of Ada, and told us the death of Mrs. Louisa (Minges) Sage last week. She once taught our primary school. (T.S.R. 53. 2 P.M. 86. S.S. 70.)

Sept. 7. Thurs. Mrs. Flanders called and told us of the death of her daughter, Mrs. Edith Caroline Ives. Received letters from Willie and from Will Cooke. Through the latter we learn of the sad death of Willie Chamberlain of Sunol, a boy of about ten years. In falling he thrust a splinter into a knee which broke off and was not discovered for three days before it was removed. It was three inches long and was quite large, and caused his death in less than a week. So there is another afflicted household. (T.S.R. 56. 2 P.M. 90. S.S. 77.)

Sept. 8. Friday. Our Theresa is today twenty six years old, and to add to the pleasure of the day a letter arrived from her and from Calvin and Adelaide. She is not very well since her arrival in N.Y. being troubled with stomach and bowels. Besides they have had many rainy days, so she has kept rather quietly at home and is enjoying her visit there with Adelaide, whom she likes very well - they apparently "take to each other." This P.M.

Sept. 9. Saturday. Wrote East and received a postal and graduating photos from Alma Cooke - very nice ones. We learn today of the death of William Gannon in Stockton. He was kicked by a young horse in a livery stable and received injuries from which he died today. (T.S.R. 58. 2 P.M. 90. S.S. 78.)

Sept. 10. Sabbath. Morning cloudy. The storekeepers of the town have signed an agreement to close their stores on Sundays on and after today. This is well, but we fear the saloons will profit by it, because there will be fewer places now where the loungers can be accommodated. To be sure, we have but one saloon in the place, Marceau's, but the Lockeford House is a disgrace fully drunken place, worse than ever before in its history, being kept by F. Parker. (T.S.R. 55. 2 P.M. 90. S.S. 71.)

Sept. 11. Monday. At last I am getting my house roof shingled on this side from which the honey bees have been annihilated. Jose Parker is doing it with a German helper, so we hope now to escape a wetting from the early rains. Have written to Ada. (T.S.R. 58. 2 P.M. 81. S.S. 68.)

Sept. 12. Tuesday. Received a letter from Ida and wrote to her and Eunice. Delia has had scarlatina, and the others, except Irving, had sore throats and were ailing for a while. Ida's Swedish girl helper did not escape the epidemic, so Ida had the case of all these oiling ones in addition to prune picking and selling, preserving fruit, etc. etc. It is a wonder how she accomplishes so much. (T.S.R. 53. 2 P.M. 81. S.S. 73.)

Sept. 15. Friday. Received letters from the Cookes and wrote to Bro. Josiah. Fred. Fairchild telephoned to Geo. tonight that they had received a message from Washington, D.C. announcing the death of Charles Thorp in the Philippines - just that word and nothing more - stating that a letter containing details would be sent later. So sad! He was only 24 yrs. old, and the youngest in the family. (T.S.R. 54. 2 P.M. 90. S.S. 78.)