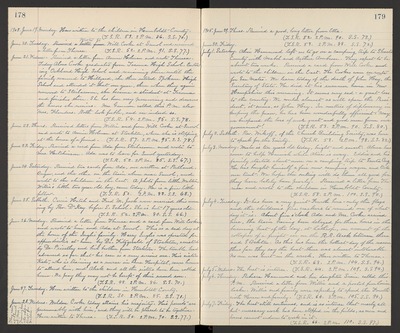 June 21. Wednes. Received a letter from Annie Holman and wrote Theresa. Today Alma Cooke graduates from Tacoma High School. Entering Oakland High School and remaining there until the family removed to Hillyard, she then entered Spokane High School and attended it that one year, then when they again removed to Steilacoom, she became a student at Tacoma and finishes there. She has been very persevering and deserves the honors she receives. Mrs. Gammon called this P.M. also Mrs. Flanders. Both look feeble, and are indeed so. (T.S.R. 54. 2 P.M. 95. S.S. 78.)

June 24. Saturday. Received two cards from Ada, one written at Portland, Oregon, and the other on the train where near Sunol, and wrote to the children in the East. A photo from little Walter, Willie's little two year old boy, came today. He is a fine little fellow. (T.S.R. 52. 2 P.M. 83. S.S. 68.)

June 26. Monday. Received a letter from Theresa and a card from Will Cooke, and wrote to him and Ada at Sunol. This is a sad day at the home of the Inglis family. Harry Inglis was operated for appendicitis at home by Dr. Fitzgerald of Stockton, assisted by Dr. Priestley and his brother from Stockton. The trouble had advanced so far that his case is a very serious one. His sister Kate, who is training as a nurse in Lane Hospital, came home to attend him, and Aleck and all the sisters have been called home. We pray they may not be bereft of their second son. (T.S.R. 48. 2 P.M. 86. S.S. 70.)

They were at Sunol at Mis - Triming home who made a trial - for Weldon.

July 1. Saturday. Alice Hammond left us to go on a camping trip to Shasta County with Mabel and Arthur Ambrose. They expect to be absent two weeks. Received a card from Will Cooke and wrote to the children in the East. The Cookes were en route for San Mateo. We learn today of the death of John Hay, the Secretary of State. He died at his summer home in New Hampshire this morning. It seems very sad - a great loss to the country. We could almost as well spare the President, it seems. as John Hay. In matters of diplomacy in keeping the peace, he has been wonderfully efficient. May we be spared the loss of such great and good men from our government! (T.S.R. 53. 2 P.M. 90. S.S. 80.)

July 3. Monday. Merle is ten years old today, bright and smart. Alma has come to help Hannah while Alice is away. Eddie and his family started about noon on a camping trip to Santa Cruz. He has bought himself a fine new camping wagon and took our tent. We hope the outing will do them all good for they have lately been poorly. Received a letter from Theresa and wrote to the children in Humboldt County. (T.S.R. 58. 2 P.M. 100. S.S. 90.)

July 4. Tuesday. It has been a very quite Fourth here - only the flags and the children's fire crackers to remind me of what day it is. About five o'clock Ada and Mr. Cooke arrived here, the train having been delayed for three hours in the burning heat of the day, at Lathrop, on account of the collapse of a freight car on the R.R. track between there and Stockton. As this has been the hottest day of the season thus far they say the heat there was almost intolerable. No one was hurt in the wreck. Have written to Theresa. (T.S.R. 63. 2 P.M. 104. S.S. 94.)

July 6. Thursday. Rebecca Hammond and her daughter Susie called this P.M. Received a letter from Willie and a postal from Louise Locke. Willie and family were expecting to spend the Fourth with Horace and family. (T.S.R. 64. 2 P.M. 105. S.S. 94.)