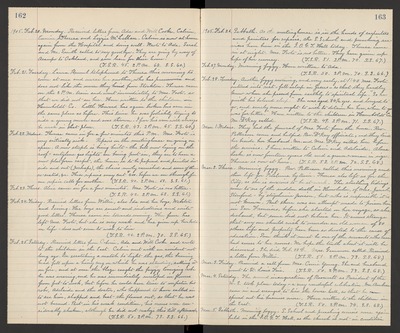 1905. Feb. 20.Monday. Received letters from Ada and Will Cooke, Calvin, Eunice, Theresa and Lizzie McLellan. Calvin is now at home again from the Hospital and doing well. Wrote to Ada, Sarah and Mr. Smith called to say goodbye. They are going by way of Acampo to Oakland, and soon leave for their home. (T.S.R. 45. 2 P.M. 68. S.S. 60.)

Feb. 21. Tuesday. Laura Bruml telephoned to Theresa this morning to come at once and nurse her mother, who has pneumonia and does not like the nurse they hired from Stockton. Theresa came on the 2 P.M. train and went immediately to Mrs. Foote, so that we did not see her. Have written to the children in Humboldt Co. Little Howard has again broken his arm in the same place as before. This time he was foolishly trying to ride a young mule and was thrown. I fear his arm will always be weak in that place. (T.S.R. 43. 2 P.M. 65. S.S. 60.)

Feb. 22. Wednes. Theresa came in for a few minutes this P.M. Mrs. Foote is very critically sick. Repairs on the meeting house are going on apace. A new steeple is being built - the bell now lying on the roof - acetylene gas lights are being put in, they are to have a new platform carpet, the house is to be papered and painted inside and out (perhaps), the chairs newly varnished and some of them re-seated, x.c. These repairs may cost $400. before we are through for one repair calls for another. (T.S.R. 40. 2 P.M. 68. S.S. 61.)

Feb. 24. Friday. Received letters from Willie, also Ida and her boys, Webster and Irving. Her boys are smart and industrious and write good letters. Theresa came in towards evening. The fever has left Mrs. Foote, but she is very weak and has given up her hold on life - does not seem to wish to live. (T.S.R. 46. 2 P.M. 70. S.S. 65.)

Feb. 25. Saturday. Received letters from Calvin, Ada and Will Cooke and wrote to the children in the East. Calvin met with an accident not long ago. in scratching a match to light the gas, the burning head fell upon a hairy rug on which he was standing, setting it on fire, and at once the blaze caught the fuzzy longing robe he was wearing, and he was immediately envelope in flames from feet to suck, but before he could have time to unfasten his robe, Adelaide and the doctor, who happened to have called in to see him, slapped and beat the flames out, so that he was not burned. But in his weak condition, his nerves were considerable shaken, although he did not realize this till afterwards. (T.S.R. 50. 2 P.M. 73. S.S. 66.)

Mar. 1. Wednes. They had the funeral of Mrs. Foote from the house. Rev. Patterson came and helped Rev. DeKay officiate, and they laid her beside her husband. Mr. and Mrs. DeKay called here before the services. I have written to Calvin and Adelaide. Alma Locke is now fourteen years old and a grown woman in size. Theresa is now at home. (T.S.R. 53. 2 P.M. 72. S.S. 68.)

Mar. 2. Thurs. Morning foggy. Rev. Patterson called this morning and then left for Petaluma by train. Theresa also left us for the City, as she is anxious to be at work. The startling tidings come to us of the sudden death in Honolulu, of Mrs. Jane L. Stanford - by strychnine poison, but who is responsible it is not known. But there was an attempt made to poison her in San Francisco, before she started on her voyage, so she declared, but some did not believe her. It seems strange that any one should wish to murder an old woman of 80 whose life and property have been so devoted to the cause of education. Some think it must be one of the servants who have had access to her rooms. We hope the truth about it will be discovered. She died Feb. 28th Mrs. Gammon called. Received a letter from Willie. (T.S.R. 51. 2 P.M. 73. S.S. 68.)

Mar. 4. Saturday. The second inauguration of Roosevelt as President of the U.S. took place today - a very wonderful celebration. Mr. Ambrose came in and arranged to hire the lower hall so that he can spread out his business more. Have written to the children in the East. (T.S.R. 50. 2 P.M. 74. S.S. 68.)

Mar. 5. Sabbath. Morning foggy. S.School and preaching services were again held in the I.O.G.T. Hall, as the church is not in condition