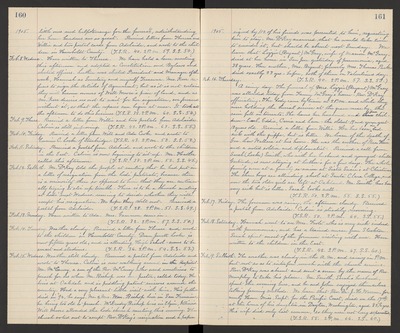 1905. little ones and helped arrange for the funeral, notwithstanding her home burdens are so great. Received letters from Theresa and Willie and two postal cards from Adelaide, and wrote to the children in Humboldt County. (T.S.R. 40. 2 P.M. 59. S.S. 54.)

Feb. 8. Wednes. Have written to Theresa. We have held a levee meeting this afternoon and adopted a Constitution and Bylaws and elected officers. Luther was elected President and Manager of the work, Hannah as Secretary and myself Treasurer. Mrs. Kerr refuses to sign the Articles of Agreement, but as it is not certain they will become owners of Will Moore's piece of land, and as Mr. Kerr desires us not to wait for her signature, we proceed without it, so that the repairs can begin at once. It took all the afternoon to do this business. (T.S.R. 38. 2 P.M. 60. S.S. 54.)

Feb. 12. Sabbath. Mr. DeKay told the people at meeting that he had put in a letter of resignation from the Lodi pastorate, because there is a minority there so opposed to him that they are continually trying to stir up trouble. There is to be a church meeting at Lodi next Wednes. evening to decide whether they will accept his resignation. We hope they will not. Received a postal from Adelaide. (T.S.R. 28. 2 P.M. 51. S.S. 49.)

Feb. 14. Tuesday. Weather cloudy. Received a letter from Theresa and wrote to the children in Humboldt County. Dean Jewett Locke is now fifteen years old, and is attending High School - seems to be smart and studious. (T.S.R. 36. 2 P.M. 54. S.S. 53.)

Feb. 15. Wednes. Weather still cloudy. Received a postal from Adelaide and wrote to Theresa. Calvin is now walking around in the Hospital. Mr. McCreery, a son of the Rev. McCreery who used sometimes to preach for us when Mr. Bishop was our pastor, called today. He lives at Oakdale and is peddling patent scissors around the country. Had a very pleasant little visit with him. His father died in '92, he says Mr. & Mrs. Wm. Bishop live in San Francisco, he being too old to preach. McKendry Bishop lives in Elgin, Illinois. Will Moore attended the Lodi church meeting this evening. The church valid not to accept Rev. DeKay's resignation and a paper

1905. signed by 112 of his friends was presented to him, requesting him to stay. Mr. DeKay answered that he would take time to consider it, but should be absent next Sunday. We learn that Lizzie (Bryant) McGary, wife of Marion McGary, died at her home in San Jose yesterday of pneumonia, aged 38 years. Her mother, Mrs. Bryant, formerly Mrs. Thomas Parker died exactly 23 yrs, before, both of them on Valentines day. (T.S.R. 40. 2 P.M. 57. S.S. 55.)

Feb. 16. Thursday. A rainy day. The funeral of Mrs. Lizzie (Bryant) McGary was attended today from Fanny McGary's home - Rev. DeKay officiating. The body Came by train at 2 P.M. and while they were holding the burial services at the grave nearby, the rain fell in torrents. She leaves her husband and five children. Earl, Eddie, Carrie and Leon - the oldest - 19 and youngest 13 years old. Received a letter from Willie. He has been in bed sick with the grippe, but is better. We learn of the death of Gen. Lew Wallace at his home. He was the author of "Ben Hur" and a noted soldier and diplomatist. Received a call from Sarah (Locke) Smith, who with her husband and youngest child Gertrude, is now staying at Luther's for a few days. The whole family were at a family re-union at Sister Susie's at Christmas. The three boys are attending school at Santa Clara College, and now the two older girls are left at Oakland. Mr. Smith has been very sick but is better. Sarah looks well. (T.S.R. 50. 2 P.M. 55. S.S. 55.)

Feb. 18. Saturday. Hannah went to see Mrs. Foote who is very sick indeed with pneumonia, and has a trained nurse from Stockton. Sarah spent most of the forenoon visiting with me. Have written to the children in the East. (T.S.R. 48. 2 P.M. 67. S.S. 60.)

Feb. 19. Sabbath. The weather was cloudy in the A.M. And rainy in P.M. but not so as to interfere much with the church services. Rev. DeKay was absent and sent a man by the name of Rev. Murphy to take his place. Mr. Smith, Sarah's husband, spent the evening here, and he and John enjoyed themselves talking farming methods. We learn that Rev. Dr. J.H. Warren, formerly Home Miss. Supt. for the Pacific Coast, died on the 17th at the home of his daughter in Dayton, Washington, aged 85 1/2 yrs. His wife died only last summer, so they were not long separated. (T.S.R. 55. 2 P.M. 66. S.S. 60.)