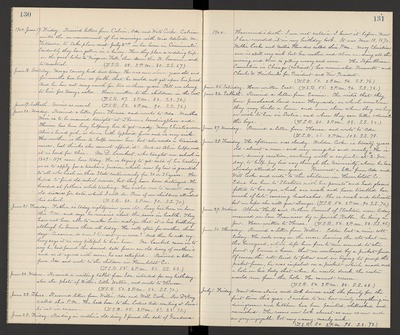 1904. June 17. Friday. Received letters from Calvin, Ada and Will Cooke, Calvin writes the announcement of his marriage with Miss Adelaide M. Fillmore, to take place next July 2nd in her home in Cincinnati. Evidently they have gotten in a hurry. Then they plan a wedding trip on the great lakes to Niagara Falls, then down the St. Lawrence and to Montreal. (T.S.R. 48. 2 P.M. 80. S.S. 67.)

June 18. Saturday. Mary's Canary bird died today. He was over eleven years old and for months has been so feeble that he could not get upon his purch. And he has not sung much for two of three years. Still we clung to him for Mary's sake. Have written to the children in the East. (T.S.R. 47. 2 P.M. 82. S.S. 76.)

June 20. Monday. Received a letter from Theresa and wrote to Ada. Martha Weir is to be married tonight at Theresa's boarding place and Theresa has been busy helping her to get ready. Mary Christiansen Alice's hired girl, is down with typhoid fever and is very sick. Her mother is there to help nurse her but she needs a trained nurse, but thinks she cannot afford it. And so Alice helps, and it is hard for Alice. Mr. D. Lambert, who taught our school in 1869-1870 came here today. He is trying to get data of his teaching so as to apply for a teacher's pension, which now - by law granted to all who teach in this State continuously for 30 or 35 years. He hoped to find old school records, but they have been destroyed. He boarded at father's while teaching. He wishes me to consult my old diaries for data, which I will do. Five of our children attended his school. (T.S.R. 60. 2 P.M. 90. S.S. 70.)

June 21. Tuesday. Father is today eighty nine years old. Lucy has been in here this P.M. and says he remains about the same in health. They have not been able to make him realize that it is his birthday. although he knows them all today. He calls often for mother these days - "Susanna, do come! O won't you come?" And there he will cry. Lucy says it is very pitiful to hear him. Mr. Lambert came in to say he had found the desired data from an old diary of mother's and as it is agreed with mine, he was satisfied. Received a letter from Ida and wrote to the children in Humboldt Co. (T.S.R. 55. 2 P.M. 81. S.S. 66.)

June 24. Friday. Reading in mother's old diary I found the date of Grandma.

1904. Hammond's death. I am not certain I knew it before. Now I have recorded it in my birthday book. It was Mar. 18, 1870. Nellie Locke and Nellie Flanders called this P.M. Mary Christiansen is still very sick but her mother and Alice are doing all the nursing, and Alice is getting weary and warm. The Republican Convention in Chicago (National) has nominated Roosevelt and Charles W. Fairbanks for President and Vice President. (T.S.R. 50. 2 P.M. 94. S.S. 76.)

June 26. Sabbath. Received a letter from Eunice. She writes that they have purchased land near Haywards, on which sometime they may build a home and move there when they no longer wish to live in Scotia, and where they can better educate the boys. (T.S.R. 60. 2 P.M. 98. S.S. 82.)

June 28. Tuesday. The afternoon was cloudy. Weldon Cooke is twenty years old - almost a man - and very energetic and manly. He is now, during vacation, working with a carpenter at $2. per day, to help pay his way through the University, where he has already attended one year. Received a letter from Ada and Will Cooke and wrote to the children in Humboldt Co. Edna has been to Stockton with her parents and had glasses fitted to her eyes, which are weak and have troubled her much of late, causing headaches. She is weak and delicate but we hope she will grow stronger. (T.S.R. 56. 2 P.M. 90. S.S. 70.)

June 30. Thursday. Received a letter from Willie. Eddie lost a nice colt today. He rode away on the mare leaving the colt shut in the barnyard, which left him free to run around to the front of Eunice's house, that is enclosed by a picket fence. Of course, the colt tired to follow and in trying to jump the picket fence, he was impaled on a picket which made such a hole in his body that when he would drink, the water would run from the hole. He cannot recover. (T.S.R. 54. 2 P.M. 84. S.S. 68.)

July 1. Friday. Went downstairs and took dinner with the family for the first time this year. I wished to see how nicely everything in dining room and kitchen has been painted, shellacked and varnished. The rooms now look almost as nice as new and are very enjoyable. Got very weary, nearly sick. (T.S.R. 50. 2 P.M. 96. S.S. 73.)