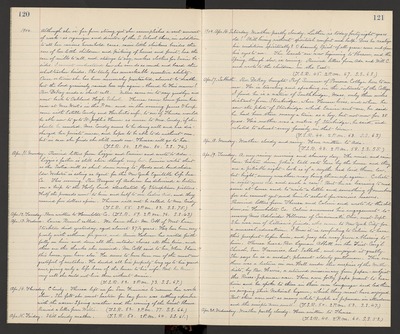 1904. Although she is far from strong, yet the accomplishes a vast amount of work, is organize and director of the S. School there, in addition to all her various household cares, raises little chickens besides the care of her little children and picking of berries and fruit, has the care of milk to sell, and strange to say, makes clothes for Susie besides. I cannot understand how she can do so much and board the school teacher besides. She truly has remarkable executive ability. Once or twice she has been nervously protected, almost to death, but the Lord graciously raised her up again, blessed be His name! Rev. DeKay made a short call. Nellie came in to say goodbye and went back to Oakland High School. Theresa came home from her case at Mrs. West's in the P.M. and in the evening James Thorp came with Estelle Condy and Herbert's wife, to see if Theresa would be able now to go to St. Joseph's Home as nurse to Mrs. Condy, if she should be needed. Mrs. Condy seems to be doing well and has discharged her private nurse, and hopes to be able to do without one, but in case she finds she still needs one. Theresa will go to her. (T.S.R. 54. 2 P.M. 84. S.S. 76.)

Apr. 11. Monday. Received letters from Lizzie and Eunice and wrote to Ada. Lizzie's father is still alive though very low. Eunice writes that as the Scotia, mill shut down owing to floods and land slides Edw. Webster is acting as Agent for the New York Equitable Life Ins. Co. This evening, Rev. Burgess of Auburn has delivered a lecture on a trip to the Holy Land illustrated by Stereopticon pictures. Half the proceeds went to him and half to our Ladies Aid, and they received five dollars apiece. Theresa will not be called to Mrs. Condy. (T.S.R. 55. 2 P.M. 83. S.S. 75.)

Apr. 13. Wednes. Laura Bruml called. We learn that Mr. Cobb of West Lane Stockton died yesterday, aged almost 87 1/2 years. He has been very poorly with asthma for years, and Annie Holman has waited faithfully on him and done all the outside chores all this time, and these are the thanks she received. Mr. Cobb said to her, "When I leave this house, you leave also." He seems to have been one of the most ungrateful of wretches. He deeded all his property, long ago to his grandson, giving only a life lease of the house to his wife. But he knew very well she could not live there without Annie. (T.S.R. 52. 2 P.M. 73. S.S. 67.)

Apr. 14. Thursday. Cloudy. Theresa left us for San Francisco to resume her work there. She felt she must hasten for hay fever was settling upon her with the warm Spring weather and the coming of the locust blooms. Received a letter from Willie. (T.S.R. 52. 2 P.M. 77. S.S. 66.)

1904. Apr. 16. Saturday. Weather partly cloudy. Luther is today forty eight years old! Still living without spiritual comfort and help. Does he realize his condition spiritually? O heavenly Spirit of all grace come and open his eyes to see. The locusts are now beginning to blossom, and the Spring. though slow, is coming. Received letters from Ada and Will C. and wrote to the children in the East. (T.S.R. 45. 2 P.M. 67. S.S. 63.)

Apr. 17. Sabbath. Rev. DeKay brought Prof. Summer of Pomona College here to see me. He is traveling and speaking in the interests of the College. I find he is a native of Southbridge, Mass, only three miles distant from Sturbridge, where Horace lives, and when he saw the photo of Sturbridge which Eunice sent me, he said he had been there many a time as a boy, but not now for 28 years. His mother was a native of Sturbridge, he said, and related to almost every family in that town. (T.S.R. 44. 2 P.M. 68. S.S. 63.)

Apr. 19. Tuesday. A very rainy morning and showery day. The wind and rain have beaten down John's tall oats here by the house and they are a pitiable sight, look as if a scythe had laid them low, but bright, sunny weather may bring them up again. Celeste is eight years old and such a care! but he is learning to read some at home and to write a little and something of numbers for she cannot send him to school for various reasons. Received letters from Theresa and Calvin and wrote to the children in Humboldt Co. Calvin announces his engagement to marry Miss Adelaide Fillmore of Cincinnati, Ohio, next Sept. She was one of Lillian's friends, who came to New York City for a musical education. I know it is comforting to Calvin to have this prospect before him, and pray she may prove a blessing to him. Theresa heard Rev. Lyman Abbott in the First Cong'l Church, San Francisco, last Sabbath, and enjoyed it greatly. She says he is a modest, pleasant elderly gentleman. This eve there was a lecture in our Hall under the auspices of the Methodists, by Rev. Harris, a returned missionary from Japan, subject The Russo-Japanese war. There were forty Japs present to hear him and he spoke to them in their own language and led them in singing their National hymn, which they must have enjoyed. But there were not so many white people as Japanese in attendance and the receipts were small. (T.S.R. 50. 2 P.M. 53. S.S. 47.)