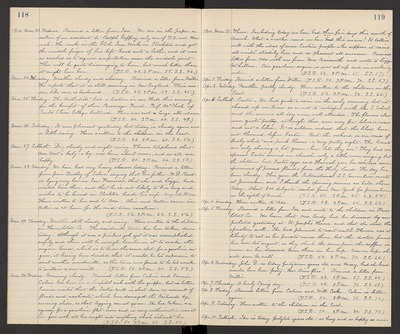 1904. Mar. 23. Wednes. Received a letter from Ida. We see in the paper a notice of an accident to Ralph Geffroy, only son of T.B. and Hannah. He works in the Globe Iron Works in Stockton, and got the middle finger of his left hand into a lathe, and it was so crushed as to require amputation near the middle joint. This will be quite discouraging to him, but much better than it might have been. (T.S.R. 42. 2 P.M. 55. S.S. 46.)

Mar. 25. Friday. The Methodists had a lecture in our Hall this evening for the benefit of their Personage Fund. Prof. McClish of Santa Clara College lectured. There was not a large attendance. (T.S.R. 40. 2 P.M. 60. S.S. 49.)

Mar. 28. Monday. We have had very heavy showers today. Received a letter from Josie Dudley of Selma saying that her father. W. D. Read is lying very low in San Francisco, that she and Lizzie had visited him there, and that he is not likely to live long and wishes to be buried in Stockton beside his wife, Augusta Holden. Have written to her and to Ada. Alice and Nellie came in. Nellie is at home for the mid-term vacation. (T.S.R. 56. 2 P.M. 62. S.S. 56.)

Mar. 29. Tuesday. Weather still cloudy and rainy. Have written to the children in Humboldt Co. The windmill tower has been taken down today. Although it was a perilous job yet it was accomplished safety, and there will be enough lumber in it to make the engine house, which is to be on the same spot, for a gasoline engine, it having been decided that it would be too expensive to erect another windmill, as the tower was found to be too weak to sustain a new mill. (T.S.R. 50. 2 P.M. 60. S.S. 52.)

Mar. 30. Wednes. Morning cloudy. Received letters from Calvin and Eunice. Calvin has been in a hospital sick with the grippe, but is better. Eunice writes that the Scotia Mill is short down on account of floods and wash outs, which have damaged the Railroads by causing slides, so that logging cannot go on. She has taken an agency for a gasoline flat-iron and is very enthusiastic over it. She goes with all her might into anything which interests her. (T.S.R. 50. 2 P.M. 60. S.S. 50.)

1904. Mar. 31. Thurs. Including today we have had three fair days this month of March. What a weather record we have had this season! It tallies well with the ideas of some Eastern people who suppose it rains all winter steadily here and is pleasant all summer. Received letters from Ada with one from Mrs. Naismith and wrote to Lizzie McLellan. Our gasoline engine is now set up and in working order. (T.S.R. 48. 2 P.M. 65. S.S. 57.)

Apr. 3. Sabbath. Easter. We had quite a rain in the early morning but it cleared up in time so as not to interfere with the S. School and the services all day were will attended. The flowers also were quite pretty, although there were very few lilies or roses and not a lilac. It is seldom indeed that the lilacs have not bloomed before Easter. But the orchard is one mass of lovely white and pink blooms - a very pretty sight. The locusts are only showing a bit green, how late they are! They had no special Easter services in church, only a little more singing, but the children had Easter eggs, and Hannah gave her scholars some specimens of pressed flowers from the Holy Land. The day has been cloudy. This year the International S. S. Convention meets at Jerusalem, and I think the opening services are held there today. About 800 delegates sailed from New York for Jerusalem on the eight of March. (T.S.R. 51. 2 P.M. 65. S.S. 55.)

Apr. 5. Tuesday. Received a letter from Ida and wrote to the children in Humboldt Co. We learn that Mrs. Condy had her diseased leg amputated yesterday at St. Joseph's Home and that she stood the operation will. She had planned to wait until Theresa was at liberty to act as her private nurse there, but the doctors found her case too urgent, as they think the severe pain she suffers is more in her diseased knee than in her hip. Now we hope she will soon be well. (T.S.R. 52. 2 P.M. 70. S.S. 66.)

Apr. 10. Sabbath. Ida is today forty two years old, as busy and as happy as ever.