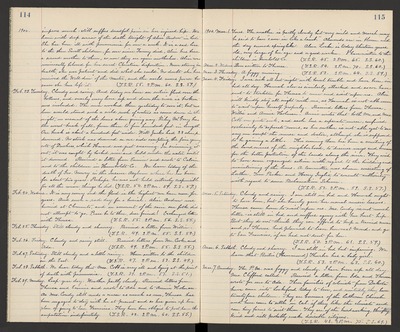 1904. improve much still suffers dreadful pain in her injured hip. We learn with deep sorrow of the death tonight of Alice Andrew in Lodi. She has been ill with pneumonia for over a week. It is a sad loss to the three Swett children, for ever since Fanny died, Alice has been a second mother to them, so now they are again motherless. Alice was universally beloved for her sweet Christian disposition. Never strong in health, she was patient and did "what she could." No doubt she has received the "Well done" of the Master, and the world seems poorer because she has left it. (T.S.R. 55. 2 P.M. 60. S.S. 59.)

Feb. 23. Tuesday. Cloudy and rainy. And today we have an entire flood over the bottoms, and nearly every levee up and down the river is broken - ours included. The men worked there yesterday to save it, but no levee would stand such a wild rush of waters as came down in the night, on account of the levees above giving away. Riley McGary has the worst break of all, from three to five hundred feet in length. Our break is about a hundred feet wide. Will Jacks had 23 sheep drowned. No stock was drowned on our side excepting the fine young colt of Duchess, which Howard was just wearing. In swimming it out, it was caught by barbed will and held under the water until it drowned. Received a letter from Eunice and wrote to Calvin and to the children in Humboldt Co. We learn today of the death of Geo. Mowry in the Insane Asylum where he has been for about two years. Perhaps he was not held entirely responsible for all the mean things he did. (T.S.R. 54. 2 P.M. 59. S.S. 57.)

Feb. 24. Wednes. It is very rainy and the flood is the highest we have seen for years. And such a sad day for a burial. Alice Andrew was buried at Clements, and on account of the rain our folks did not attempt to go. Peace be to thee, dear friend! Exchanged letters with Theresa. (T.S.R. 55. 2 P.M. 56. S.S. 55.)

Feb. 29. Monday. Leap-year day. Weather partly cloudy. Received letters from Theresa and Eunice and wrote to Ada and to Annie Holman. As Mrs. Condy still needs a nurse no much so ever, Theresa has been engaged to stay with her at present and as has given up her plan of giving to San Francisco. They have been obliged to postpone the amputation indefinitely. (T.S.R. 42. 2 P.M. 60. S.S. 55.)

Mar. 4. Friday. I was sick all last night with bowel trouble and have been in bed all day. Hannah also is similarly attacked and so we have sent to Stockton for Theresa to come and wait upon us. Alice will kindly stay all night with me, as Hannah is not able even to wait upon herself properly. Received letters from Theresa, Willie and Annie Holman. Annie writes that both Mr. and Mrs. Cobb are quite sick, and each has a separate nurse, comfined exclusively to separate rooms, as her mother is not able yet to see any one except the nurse and doctor, although she is supposed to be gaining a little. This evening there has been a meeting of the land owners of the neighborhood, to discuss ways and means for the better protection of the lands along the river. They wish to have some organized action with regard to the building and maintaining of the levees. A Committee was chosen consisting of Luther, Tom Parker and Harry Inglis, to consult authority with regard to some Reclamation Scheme. (T.S.R. 52. 2 P.M. 59. S.S. 57.)

Mar. 5. Saturday. Cloudy and rainy. I am still in bed and Hannah ought to have been, but the bravely gave her usual music lessons. Theresa came home to wait upon us. Mrs. Condy is not much better - is still in bed and suffers agony with her hurt hip. But they do not think they can afford to keep a trained nurse and so Theresa had planned to leave her next Mond. and go to San Francisco, if we had not sent for her. (T.S.R. 50. 2 P.M. 61. S.S. 59.)

Mar. 7. Monday. The P.M. was foggy and cloudy. I have been up all day. Mrs. Clifford called. Received a letter from Ida and Theresa wrote for me to Ada. Three families of colonists from Dakota have come into Lockeford today to live, and unitedly they have twenty four children. They are Germans of the Lutheran Church and have come to settle in Cal. if they like the climate and can buy farms to suit them. They are of the hardworking, thriftly kind and will probably make desirable citizens. (T.S.R. 48. 2 P.M. 75. S.S. 69.)