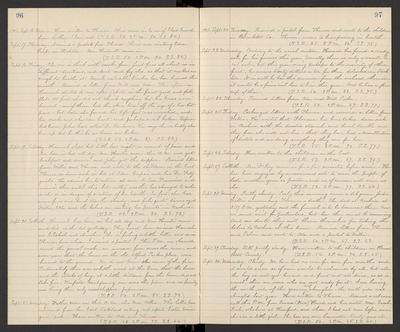 Sept. 18. Friday. The air is thick with smoke from forest fires all about us in different directions, and dust and fog also, so that it makes me cough to breathe it. much valuable timber has been burned this mouth. Received a letter from Will and Ada. This afternoon Hannah started to run after Celeste in the front-yard and fell flat. At first she did not think anything but her knees were burried - one of them had the skin torn of the size of a two bit juice but later she found her left foot was wrenched, and his neck and shoulder hurt, and perhaps a rib broken. Before bed time, John had called Dr. Barbour. He says she is badly shaken up but he thinks no bones are broken. (T.S.R. 53. 2 P.M. 87. S.S. 83.)

Sept. 19. Saturday. Hannah slept but little last night on account of pain and has been in bed all day. Mrs. Hunter came this A.M. and got breakfast and dinner and John got the supper. Received letters from Willie and Theresa and wrote to the children in the East Theresa is down sick in bed at Edna Grape's and has De Fritz gerald. He advises her to return at once to San Francisco and remain there until this hot, sulty weather has changed to cooler as she is in danger of a return of her trouble. In fact she has some fever and bowel trouble already, and feels quite discouraged. Willie, Etta and the babies are visiting her parents in Nashua. (T.S.R. 48. 2. P.M. 80. S.S. 73.)

Sept. 20. Sabbath. Hannah has been in bed all day and Mrs. Hunter came and did as she did yesterday. They must have missed Hannah in S. School and church. She is feeling a little better and so is Theresa. from whom I received a postal. This P.M. observed amid the general smoke, an increase from across the river, and soon saw that the house on the old Alfred Parker place, was burned to the ground. We do not know the cause of the fire. Fortunately there was so little wired at the time, that the barn and the stacks of hay, at a little distance from the house, did not take fire. Winfield Montgomery now owns the place and no family was living there, only woodchoppers, Japanese. (T.S.R. 50. 2P.M. 77. S.S. 73.)

Sept. 23. Wednesday. Contrary to the usual custom. Howard has found a ready sale for his quinces this year. Usually there is only a small local sale. but this year, swing perhaps to the scarcity of other fruit, he receives twenty dollars a ton for them delivered in Stockton. It is well he has this revenue from the orchard, otherwise it would be a financial loss to him this year. And he has a fair crop of them. (T.S.R. 50. 2 P.M. 88. S.S. 75.)

Sept. 25. Friday. Exchanged letters with Theresa and received a letter from Willie. He writes that Florence has been taken down sick in Nashua with the dreaded stomach and bowel tumble and they fear she will not live that they have had consultation of doctors and are doing everything they can for her. (T.S.R. 55. 2 P.M. 92. S.S. 77.)

Sept. 28. Monday. Partly cloudy. Early this morning came a telegram from Willie announcing Florence's death. She died at Nashua at 3:17 P.M. yesterday and the funeral is to be tomorrow there. Now we must wait for particulars, but how they must be sorrowing. And no doubt they will blame themselves for taking the babies to Nashua at this time. Received letters from Theresa and Calvin and wrote to Ada and a postal to Willie. (T.S.R. 50. 2 P.M. 67. S.S. 63.)

Sept. 30. Wednesday. Cloudy. We have had no rain for over five months and it would seen as if rain would be welcomed by all, but all the hay is not yet housed and fruit not all dried, so as is usual, there are some who are not ready for it. I am having the north side of the granary roof shingled the south side was shingled last year. Have written to Theresa. Received a welcome call this P.M. from Emma (Kerr) Hurd and her sister, Mrs. Sarah Fish, who lives at Hanford, and whom I had not seen before since she was a little girl. she was one son, Lauriston twenty years old. (T.S.R. 50. 2 P.M. 65. S.S. 60.)