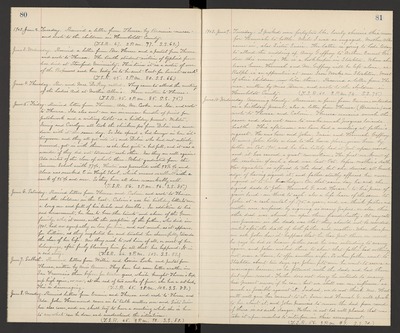 June 3. Wednesday. Received a letter from Bro. Horace and a postal from Theresa and wrote to Theresa. The tenth student victim of typhoid fever has died at Stanford University. This time it is a sister of one of the Professors and her body is to be sent East for burial so sad? (T.S.R. 45. 2 P.M. 80. S.S. 66.)

June 5. Friday. Received letters from Theresa, Ada, Mr. Cooke and Ida, and wrote to Theresa. Ida also sent me an immense bundle of pieces for patchwork and writing tablet as a birthday present. Webster, Irving and Carolyn all took the chicken pox from Delia and came down with it the same day. So Ida spread a bed lounge in her sittingroom and they all got into it, and Delia who had not entirely recovered, got in with them, is she had quite a bed full, and it was a wonder if they did not torment each other. Now they are well again. Ada writes of the close of schools there. Robert graduated from the Common School with 97%, Hester was promoted with 93 1/2 % and Alma was marked E in High School, which means excellent with a rank of 95% and over. So they have all done remarkably well. (T.S.R. 56. 2 P.M. 96. S.S. 85.)

June 6. Saturday. Received letters from Theresa and Calvin and wrote to Theresa and the children in the East. Calvin's was his birthday letter to me, a long one and full of his trials and troubles. In addition to his sad bereavement, he has to bear the taunts and abuse of the Green family, who, it seems, with the exception of the father, who died in 1901, had no sympathy or love for him, and not much, as it appears, for Lillian, as they neglected her and treated her shame full towards the close of her life. Now they wish to rob him of all, or most of her belongings, after feely blaming him for all that has happened. It is a sad story. (T.S.R. 66. 2 P.M. 103. S.S. 93.)

June 7. Sabbath. Received letters from Willie and Louise Locke and postal from Theresa, written by Miss Brown. They have had some hotter weather in San Francisco than before for twelve years, which brought Theresa's temp. up high again, so now, at the end of two weeks of fever, she has a set back. This is discouraging. (T.S.R. 65. 2 P.M. 102. S.S. 83.)

June 8. Monday. Received letters from Eunice and Theresa and wrote to Theresa and Ada. John Hammond came in to talk matters over and Sister Susie has also come, and we shall try to have a meeting while she is here to see what can be done and understand the situation. (T.S.R 65. 2 P.M. 98. S.S. 83.)

1903. June 9. Tuesday. I picked over forty two lbs. lovely cherries this mom for Hannah to bottle. While I was so engaged, Mother Allen came in, also Sister Susie. The latter is going to Lodi today to attend the weeding of Amy Geffroy to Arthur Emmel Gordon this evening. He is a bookkeeper in Stockton. When she leaves home, Hannah and Mr. Geffroy will be left alone, as Ralph is an apprentice at some Iron Works in Stockton. Most of their children now like there. Received a letter from Theresa, written by Miss Brown, and wrote to the children in Humboldt County. (T.S.R. 60. 2 P.M. 94. S.S. 75.)

June 10. Wednesday. Morning cloudy. Received a fern from Eunice, intended as a birthday present, also a letter from Theresa (Brownie) and wrote to Theresa and Calvin. Theresa remains much the same and does not seem to make much progress towards health. This afternoon we have had a meeting at father's request. He was here and John, Susie and Hannah Geffroy. It seems John holds a deed to the home place, given him by father in Oct. 1901, and he has lately had it put upon record, and it has caused a great commotion. The first we know of the existence of such a deed was last Oct. before mother's death. Her signature is affixed to the deed, but she denied all knowledge of having signed it, and father stoutly affirms he never signed it to his knowledge. On that same day he and she signed deeds to John, Hannah G. and Horace to his piece of grain land - one-third to each - also a life lease of the same to John at a cash rental of $175. a year, and we think father and mother were confused by signing so many papers, or else this other deed was shoved in upon them fraudulently. At any rate one provision in the deeds was that they should not be recorded until after the death of both father and mother. When therefore we ask John how it happens that he has put them on record he says he did so because father said he was intending to marry again, and John wished thus to show that father had nothing, not even a home, to offer another wife. So when father went to Stockton about ten days ago, John felt sure he went to secure a marriage license, so he followed with the deeds and had them put upon record. Father does not deny he intends to marry his present nurse, if he can, but we shall use our influence as much as possible against it. Indeed, we do not think Mrs. Hodnutt will give her consent to it. Susie and Hannah G. will speak to her about it, and John promises to remove the deed from record if there is no such danger. Father is not too well pleased that we take it upon ourselves to interfere in this arrangement. (T.S.R. 56. 2 P.M. 87. S.S. 70.)