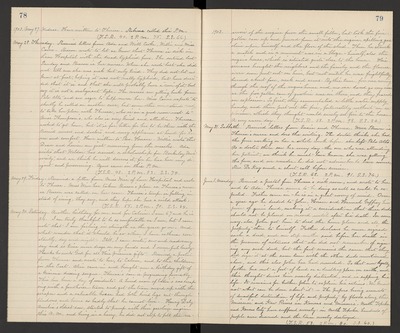 May 28. Thursday. Received letters from Ada and Will Cooke, Willie and Miss Caine. Beacon wrote to let us know that Theresa is sick in Lane Hospital with the dread typhoid fever. She entered last Sunday and Beacon is her nurse. When she wrote last she did not tell me she was sick but only tired. They did not let us know at first, hoping it was not really typhoid, but have decided that it is and that she will probably have "run" of it, but say it is not a malignant type. The nurses are getting back from Palo Alto and are eager to help nurse her. Miss Caine expects to shortly be called on another case, but some other one stands ready to take her place with Theresa, who is in a good room next to Miss Thompson's, who also is very kind and attentive. Theresa wished to get home, but it is far better for her to be there with the trained nurses and doctors and every appliance at hand for her use and comfort. Have written to Bro. Horace. Willie writes that Dean and Louise are just recovering from the measles. Ada writes that Weldon has secured a scholarship for Berkeley University, and we think he will deserves it, for he has been very digent and persevering. Agnes came in this P.M. (T.S.R. 48. 2 P.M. 83. S.S. 74.)

May 29. Friday. Received a letter from Miss Weir of Lane Hospital and wrote to Theresa. Miss Weir has taken Beacon's place as Theresa's nurse as Beacon was called on her case. Theresa's temp. is falling instead of rising, they say, and they hope she has a mild attack. (T.S.R. 55. 2 P.M. 90. S.S. 84.)

May 30. Saturday. Another birthday for me and for Calvin. I am 67 and he is 34. I am truly thankful to be so comfortable as I am, but I can note that I am failing in strength as the years go on. And what wonder that it should be so when I have asthma constantly, day and night. Still, I can write, sew and read every day and so time never drags on my hands and I never feel lonely. Thanks be unto God for all His Precious gifts. Received a postal from Theresa and wrote to her, to Calvin, and to the children in the East. Alice came in and brought me birthday gift of a kimona dressing sacque. Theresa's care is progressing favorably. This has been a day of accidents. A hired man of Eddie's was scraping with a four horse team and got the team mixed up with the scraper and a valuable horse had both hind legs ent through tendons and bones so badly that he cannot live. Henry Daly, Amelia's oldest son, started to pump with their gasoline engine this A.M. and being in a hurry, he did not stop to fell the reservoir

1903. of the engine from the small filler, but took the five gallon can up and poured from it into the engine, spilling gasoline upon himself and the floor of the shed. Then he struck a match and in a moment was in a blaze - himself, also the engine house, which is situated quite close to the house. His screams brought the neighbors and the family and the flames were soon put out on him, but not until he was frightfully burned about face, neck and arms. By this time, fire was coming through the roof of the engine house and no one dared go very near as the five gallon can of gasoline was in there and they feared an explosion. So first, they accumulated a little water supply handy, and then put out the fire, fortunately without an explosion, which they thought would surely set fire to the house. A very warm day. (T.S.R. 58. 2 P.M. 98. S.S. 84.)

May 31. Sabbath. Received letters from Susie and Theresa. Miss Brown is Theresa's nurse and does the writing. The doctor thinks she had the fever working on her a whole week before she left Palo Alto. As a doctor there saw her every day - the one who was attending her patient, we think he must have known she was getting the fever, and we wonder he did not advise her to leave sooner Rev. DeKay made a short call before service. (T.S.R. 62. 2 P.M. 91. S.S. 74.)

June 1. Monday. Received a postal from Theresa's sick room, an wrote to her and to Ada. Theresa seems to be doing as well as could be expected. Father came in - he is in a great worry of mind. Over a year ago he deeded to John, Horace and Hannah Geffrey his piece of grain land, making it a consideration that these deeds should not be placed on record until after his death. In some way, also, John got him to deed the home place and all the property there to himself. Father declares he never signed such a deed, and our step-mother said before her death in the presence of witnesses that she did not remember of signing any such deed, but the fact remains the same that they did sigh it at the same time with the other deeds mentioned above, and this also John has had recorded. So that now legally father has not a foot of land or a dwelling place on earth, and this thought drives him nearly distracted, and is sapping his life. It remains for brother John to explain his actions. We know not what can be done about it._ The papers being accounts of dreadful destruction of life and property by floods along the Missouri and Kaw Rivers in Kansas and Missouri. North Topeka and Kansas City have suffered severely in North Topeka hundred of people were drowned and the town nearly destroyed. (T.S.R. 53. 2 P.M. 80. S.S. 60.)