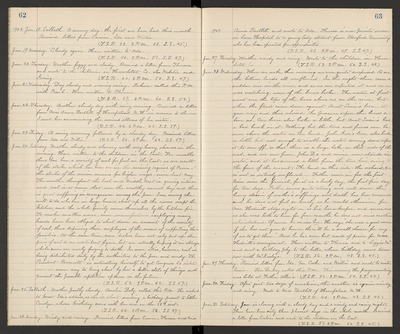 Jan. 24. Saturday. Weather cloudy and showery with very heavy showers in the evening. Have written to the children in the East. For months there has been a scarcity of coal for fuel in the East, as one result of the strike which has been on in the mining regions of Penn. the strike of the union miners for higher wages - since last May. The weather throughout the East and Middle West is growing intense and coal is so scarce that even the wealthy cannot buy, and there is quat suffering in consequence among the poor. Some among the well to do, who live in large houses, shut up all the rooms except the kitchen, and the whole family warm themselves by the kitchen fire. To make matters worse, some manufactories employing many hands have been obliged to shut down an account of the scarcity of coal, thus depriving their employees of the means of supporting their families. At the same time, some dealers have not only put up the juice of coal to an exorbitant figure, but are actually keeping it in storage while some are nearly freezing to death. In some cities, however, coal is being distributed daily by the authorities to the poor and needy. The President - Roosevelt - is interesting himself to get Congress to intervene in some way to being about by law a better state of things and prevent the possible repetition of them in the future, (T.S.R. 53. 2 P.M. 62. S.S. 57.)

1903. Anna Bartlett and wrote to Ada. Theresa is now private nurse in Lane Hospital to a young lady student from Stanford University who has been operated for appendicitis. (T.S.R. 43. 2 P.M. 49. S.S. 47.)

Jan. 28. Wednesday. When we woke this morning we were quite surprised to see the bottom lands all overflowed. In the night there came a sudden rise in the river, and as no one expected it and no one was watching, some of the levees broke. The water at first went over the tops of the levees above us on the river, but when the flood came down against Aunt Susie's levee, it gave way, and thus relieved the pressure upon the levees above us. Our levee also broke a little, but Aunt Susie's has a bad break in it. Nothing but the trees and fences can be seen above the water on her land. John Kerr's levee also broke a little but not enough to enable the water coming down upon it to run off, so that there is a large lake on that side of the road , and over now fence, John D.'s and mine now stands in water, and it has swerved a little from the tune line owing to the force of the current. The land on this side - the orchard, D.C. is not so entirely overflowed.- Father came in for the first time since the funeral, for it is a lovely day, the first fair day for ten days. Father seems quite strong and well since the heavy strain of mother's suffering and death has been removed and he does not feel so lonely as he would otherwise, for Mrs. Hodnitt stays right on as his housekeeper and nurse, and as she was both to him for four months, he does not miss mother's ministration - of course he misses her. He says, "she was a good woman if she has not gone to heaven, there'll be a small chance for any of us to get there." And he has none but words of praise for Mrs. Hodnitt's management. Have written to Theresa and to Lizzie Mc. and sent a birthday pkg. to the latter, whose birthday occurs tomorrow with McKinley's. (T.S.R. 36. 2 P.M. 48. S.S. 45.)