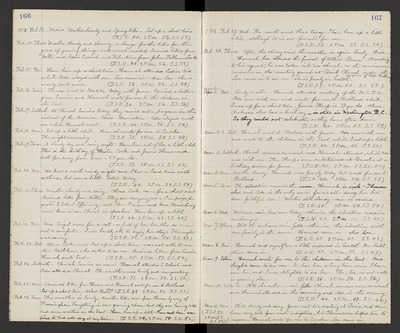 Feb. 14. Thurs. Weather cloudy and showery - a change for the better for the good of growing things - and much needed. Received letters from Willie and Susie Cornish and Valentine from John Fillmore Lock. (T.S.R. 40. 2 P.M. 56. S.S. 52.)

Feb. 21. Thurs. Weather cloudy and rainy - Alma Cooke came for a short visit. Received letter from Willie. They are carrying out a Campaign for greater S. School Efficiency, and Rev. Pierson and Mrs. Woodberry were here in our Church as speakers. Have been up a little. (T.S.R. 48. 2 P.M. 43. S.S. 43.)

Feb. 26. Tues. The weather is lovely. Another letter came from Horace by way of Framingham Everything is now growing apace, but they are having cold and seven weather in the East - Have been up a little - have not been confined to bed all day at any time. (T.S.R. 40. 2 P.M. 58. S.S. 52.)

Feb. 28. Thurs. After the Stormy wind the weather is again lovely. And Hannah has attended the funeral of Albert Brown. According to his request, he was taken into no church, so the services were conducted on the cemetery ground at Brick Church under the auspices of Odd Fellows Lou came in to see me - she is poorly in health. (T.S.R. 37. 2 P.M. 60. S.S. 55.)