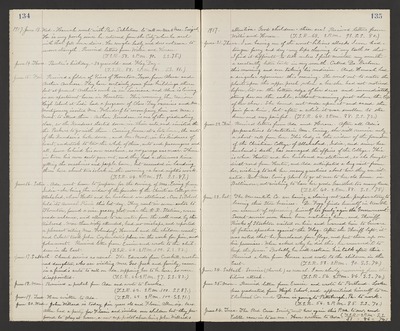 June 15. Fri. Received a folder of Views of Houston, Texas, from Alma and Arthur Ambrose. They have certainly some fire buildings there, but at present Arthur's work is in Louisiana and Alma is living in an apartment house in Houston. This evening the Union High School at Lodi had a program of Class-Day exercises and Mr. Montgomery invited Mrs. Folendorf to accompany him and Mrs. Mont. to attend them - Arthur Knudsen is one of the graduating class, so the Knudsens started down in their auto, and invited the the Parkers to go with them - Coming home at a late hour, the auto of the Knudsen's broke down, and Mr. Mont. in his kindness of heart, undertook to tow the whole of them, auto and passengers and all, home behind his own machine, as no garage was near. There in turn his own auto gave out, and they had a strenuous time getting the machines and people home, but succeeded in landing them here about two o'clock in the morning - a hard night's work. (T.S.R. 64. 2 P.M. 99. S.S. 87.)

June 16. Satur. Ada went home to prepare for the coming of Mrs. Ewing from India - she being the widow of the founder of the Christian College in Allahabad, where Hester and her husband are stationed. Our S. School held its Annual Picnic this hot day. They went in seven autos to Thornton, found a nice, grassy plot near the R.R. Station, were made welcome, and allowed to use water from the well used by the Railroad. More than sixty attended, had no mishaps, and reported a pleasant outing. Mrs. Folendorf. Hannah and the children went, and Celeste took John Coykendall's place in the work for Jim, and John went. Received letter from Eunice and wrote to the children in the East. (T.S.R. 66. 2 P.M. 100. S.S. 82.)

June 20. Wed. John Willard is today five years old and Flossie Allen six. Mrs. Allen had a party for Flossie and invited our children but they preferred to play at home, a new cap pistol absorbing John Willard's

June 21. Thurs. I am having one of the worst bilious attacks I ever had - tongue furry and dry - my lips cleaving to my teeth so that I find it difficult to talk unless I first moisten my mouth - a constantly bitter taste in my mouth. Called Dr. Barbour this morning and am taking his medicine. And Hannah had a singular experience this morning. She went out to water the plants upon the upper porch when a bee she had not noticed before, lit on the bottom edge of her dress and immediately stung her on the ankle, without warning, just above the top of her shoe. She bound wet soda upon it and eased the pain for a time, but after a while it was swollen to the knee and very painful. (T.S.R. 64. 2 P.M. 88. S.S. 72.)

June 22. Fri. Received letters from Ada and Horace. After all Ada's preparations to entertain Mrs. Ewing she will receive only a short call from her. This lady is the widow of the founder of the Christian College of Allahabad, India, and since her husband's death, has managed the affairs of the College. This is where Hester and her husband are stationed, so she brought direct word from Hester, and Ada anticipated a long visit from her, wishing to ask her many questions about how they are situated. But Mrs. Ewing plans to go at once to her old home in Baltimore, not wishing to have her goods handled too many times. (T.S.R. 60. 2 P.M. 88. S.S. 75.)

June 23. Sat. The Mercantile Co. are having a closing-out sale, preparatory to leaving their Store business. Dr. Fogg finds himself in trouble on account of expressing himself too freely "agin the Government". Secret service men have been watching him, and Sheriff Riecks of Stockton waited on him and warned him to beware of future speeches against the Flag. After the Sheriff left, it was noted that he purchased four flags, and put them up on his premises. When asked why he did this, he answered, "O to keep the peace", Probably he will restrain his talk after this. Received a letter from Horace and wrote to the children in the East. (T.S.R. 58. 2 P.M. 90. S.S. 74.)