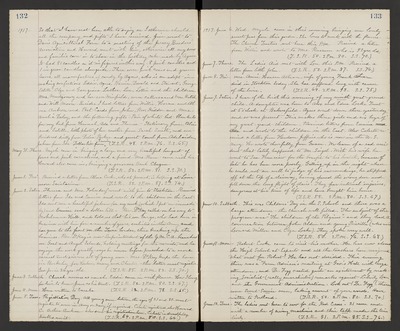 1917. So that I have not been able to enjoy as I otherwise should all the company and gifts I have received. Jim went to Davis Agricultural Farm to a meeting of the Jersey Breeders' Association and Howard went with him, otherwise all my sons and families came in to share in the birthday cake made by Agnes. It had 81 candles on it in figures in this way. 8 pink candles and 1 in green candles along side. There were pink roses and green leaves, all manufactured of candy by Agnes, who is an adept in making confections. Eddie, Agnes, Bernice, Donald and Stewart, George Estella, Olga and Georgiana, Luther, Lou, Lottie and the children, Mrs. Montgomery and her son Winfield, were callers and Mrs. Hatch and Will Moore. Besides I had letters from Willie, Horace and Alma Ambrose and Post-Cards from John, Rev. Kidder and Mrs. Amelia Daley, and the following gifts - Pair of white bed-blankets for my bed from Hannah, Ada and Theresa - Stationery from Alice and Estella, little photo of her mother from Sarah Smith, and embroidered doilly from Delia Parker and guest towel from Adelaide. Jabeau from Ida - Dollar bill from Eunice. (T.S.R. 48. 2 P.M. 76. S.S. 65.)

June 2. Satur. Theresa and Mrs. Folendorf went with Jim to Stockton. Received letters from Ida and Eunice and wrote to the children in the East. Ida sent me a beautiful jabeau for my neck, (which I put on immediately) and Eunice sent a dollar bill. Rev. Dekay called on his way to Mokelumne Hill, and told us that his son George, who had been in business with him for a number of years, enlisted in the Army and has gone to the front on the Texas border, thus breaking up the business. Rev. DeKay ins now Superintendent of the Y.M.C.A branches on Goat and Angel Islands, holding meetings for the recruits, and he enjoys the work greatly - says he never before preached to a more earnest and sincere set of young men. Mrs. DeKay keeps the hour in Berkeley for Helen, Mary and Chester - the latter must register. Geo. Jr. is 26 yrs. old. (T.S.R. 55. 2 P.M. 82. S.S. 70.)

June 5. Tues. Registration Day. All young men between the ages of 21 and 30 - must register to serve in Army or Navy, if required. Celeste registered also Howard C. Arthur Ambrose also sent his registration here. Celeste is dreadfully troubled over it. (T.S.R, 54. 2 P.M. 80. S.S. 64.)

June 9. Satur. I hear of the birth this morning of my ninth great-grandchild. A daughter was born to Alex and Edna Locke Trent at 5 o'clock at Bakersfield - Agnes went down there yesterday - and so was present. This makes three girls and six boys of my great-grand-children. Received letters from Eunice and wrote to the children of the East. Also Celeste received a letter from Hudson Jeffries's who is now in the U. S. Navy. He wrote cheerfully from Guam. We learn of a sad accident that lately happened to Mr. Siegel. With his wife he went to San Francisco for the benefit to his health, because of late he has been more poorly. Getting up in the night when he could not see well to judge of his surroundings, he stepped off at the top of a stairway, having opened the wrong door and fell down the long flight of stairs. They fear internal injuries, dangerous at his time of life and have brought him home. (T.S.R. 55. 2 P.M. 80. S.S. 67.)

June 10. Sabbath. This was Children's Day in the S. School and there was a large attendance - the church well filled. The subject of the program was - "The children of the Pilgrims" - and they had a conversation between John Alden and young Priscilla (who were Leonard Miller and Olga Locke). They spoke very well. (T.S.R. 50 2 P.M. 76. S.S. 68.)

June 11. Mon. Robert Cooke came to visit his mother - He has now closed the High School at Esparto and all the teachers have resigned. What next for Robert? He has not decided. This evening there was a "Farm Adviser's meeting at Geo.'s Hall with large attendance, and Dr. Fogg created quite an excitement by making Socialist (really anarchistic) remarks against Liberty Loan and the Government Administration. Look out! Dr. Fogg! there were Secret Service men, taking account of your words. Have written to Portland. (T.S.R. 50. 2 P.M. 80. S.S. 70.)