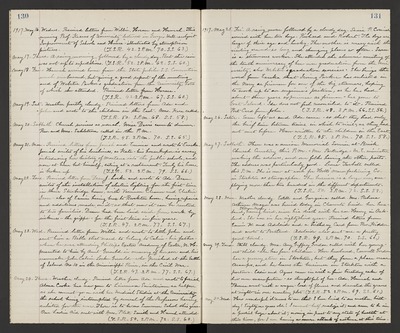 May 18. Fri. Hannah arrived home from the State Jubilee S.S. Convention much sum burned, but giving a good report of the meeting and of Webster Parker's graduation from the University both of which she attended. Received letter from Horace. (T.S.R. 42. 2 P.M. 67. S.S. 60.)

May 21. Mon. Received letters from Josiah and Eunice and wrote to Eureka. Josiah writes of his loneliness, as Kate - his housekeeper is away introducing her history of Montana in to the public schools, and none at home but himself, eating at a restaurant. Truly his home is broken up. (T.S.R. 52. 2 P.M. 79. S.S. 66.)

May. 22. Tues. Received letter from Dean J. Locke and wrote to Ada. Dean writes of the installation of electric lighting for the first time in their Sturbridge home, with Vacuum Cleaner and Electric Iron - also of Eunice having been to Brockton home, having repairs and additions made on it, so that now it can be rented to two families. Dean had been laid aside from work by sickness - the grippe - for the first time in five years. (T.S.R. 47. 2 P.M. 77. S.S. 67.)

May 23. Wed. Received letter from Willie and wrote to little John and sent him a Bible that used to belong to Calvin - his father - when he was attending Phillips Exeter Academy of Exeter, N. H. presented to him by Aunt Gerould in memory of her son and his namesake - John Calvin Locke Gerould - who perished at the battle of Island No. 10 in the Mississippi River, in the Civil War. (T.S.R. 47. 2 P.M. 77. S.S. 67.)

May 24. Thurs. Weather cloudy. Received letter from Ada and wrote to Josiah. Alma Cooke has now gone to Livermore Sanitarium as helper as she cannot go on with her Medical Studies at the University the school being interrupted by several of the Professors having enlisted for the war. There is to be no Summer School this year. Our Ladies Aid met with Mrs. Platt Smith and Hannah attended. (T.S.R. 50. 2 P.M. 72. S.S. 60.)

1917. May 25. Fri. A rainy morn followed by a cloudy day - Susie P. Cornish arrived with her two boys - Richard and Robert. The boys are large of their age and husky. The mother is weary with the visiting around so long and changing places so often. Susie is a strennous worker. She attended the alumni meeting of the tenth anniversary of her own graduation from the University, also Webster's graduation exercises. She brings the word from Eureka that Irving Parker has enlisted in the Navy as fireman for one of the big steamers, hoping to work up to an engineer's position, as he has had about three years experience as fireman, has gone to Goat Island. Ida does not feel reconciled to it. Received Post-Card from John. (T.S.R. 48. 2 P.M. 66. S.S. 56.)

May 27. Sabbath. There was a union Memorial Service at Brick Church Cemetery this P.M. - Mr. Partridge - M.E. minister making the address, and our folks having the other parts. The address was particularly good. Leone Tarbell called this P.M. She is now at work for Holt's Manufacturing Co. in Stockton as stenographer. The business is a large one, employing more than two hundred in the different departments. (T.S.R. 50. 2 P.M. 72. S.S. 58.)

May 28. Mon. Weather cloudy. Estelle and Georgiana called. Mrs. Rebecca Athearn Magee was buried today in Clements beside her husband, Stillman Magee, having lived, since his death with her son Henry in Oakland. She was in her eightythird year. Received letters from Eunice W. and Adelaide and a birthday Card from Rev. Kidder and wrote to Portland. Adelaide also sent me a pretty guest towel. (T.S.R. 49. 2 P.M. 70. S.S. 60.)

May 29. Tues. Still cloudy. Mrs. Amy Geffroy Gordon called with her youngest child - she has four children. Her husband, Emmett Gordon has a grocery store in Stockton, but they farm a place near Acampo, and he leaves the business in Stockton with a partner. Eddie and Agnes came in with a fine birthday cake of her own manufacture - so thoughtful of her. Ada, Hannah and Theresa went with a wagon - load of flowers and decorated the graves at night in our cemetery plot. (T.S.R. 52. 2 P.M. 69. S.S. 61.)

May 30. Wed. How wonderful it seems to me that. I have lived to see another birthday! Eightyone years old! I cannot half realize it, and seem to be in a partial haze about it, owing in part to my state of health at this time, for I am having a severe attack of asthma at this time.