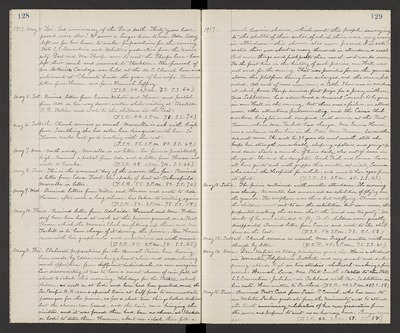 1917. May 4. Fri. Sad anniversary of the Dr.'s death. Thirty years have passed since then! It seems a longer time to me - Ada today left us for her home, to make preparations for the coming State S.S. Convention and Webster's graduation from the University. Dad and Ma Thorp came to visit the Thorps here - have left their ranch and removed to Stockton. The funeral of Mr. Antonio Cardoza was held at the M.E. Church here and interment at Clements beside the grave of his wife. Received letters from Horace and from Hannah Geffroy. (T.S.R. 44. 2 P.M. 73. S.S. 64.)

May 5. Sat. Received letters from Eunice Webster and Horace and postal from Ada on her way down, written while waiting at Stockton R.R. Station and wrote to the children in the East. (T.S.R 46. 2 P.M. 78. S.S. 70.)

May 10. Thurs. Received letter from Adelaide. Hannah and Mrs. Folendorf have been hard at work at the picnic ground on a Rest Room which the Women's Club are fitting up there, and Mrs. Tarbell is t have charge of it during the picnic. Bro. Horace came with his graphonola and entertained us with music. (T.S.R. 45. 2 P.M. 78. S.S. 65.)

May 11. Fri. Elaborate preparations for the Annual Picnic here having been made by Eddie, working almost alone and encountering much opposition from different individuals, we can imagine how disconcerting it was to have a smart shower of rain fall at about 6 o'clock this morning - Holidays for the Stockton school children, as well as at Lodi and here had been granted and the So. Pacific R.R. ran a special train at half fare to accommodate passengers for the picnic, so for a short time things looked dubious but the shower soon passed, and the train came bringing the visitors, and it was found there had been no shower at Stockton or Lodi to deter them. However, about one o'clock there fell a

1917. much heavier shower, which sent the people scurrying to the shelter of their autos, of which there were very many in attendance - this shower also soon passed. It is estimated there were about as many thousands in attendance as usual. But more thugs and pick pockets than usual - so it would seem. For the first time in the history of such picnics, our Hall was not used for the dancing. That was provided for on the grounds alone, the platform having been enlarged, and the music provided. All sorts of races were run, a Cattle Show was in evidence at which James Thorp received first prize for a Jersey milker. Mrs. Salhstrom had advertised a Musical Concert to be given in our Hall in the evening, but there was a failure in attendance, other attractions predominating, and the Civic's Club workers being too much occupied with service at the Rest Room, where Mrs. Tarbell had charge. Mrs. Emma Heurd was a welcome caller here in the P.M. Mrs. Russem, her mother did not come. She will be 93 years old next month, still she keeps her strength remarkably, sleeping upstairs, and going up and down stairs a number of times daily, also out-of-doors in the yard. She and her daughter, Sarah Fish, and Emma have all been quite sick with grippe this winter, especially Emma, who was in the Hospital for awhile, and seems to have aged from its effect. (T.S.R. 52. 2 P.M. 65. S.S. 63.)

May 12. Satur. The picnic continued with smaller attendance. The morning was cloudy. An aviator had announced an exhibition of flying over the grounds. The aeroplane was there, but no flying. Theresa and the children went out to see the exhibition but saw none, the proprietor making the excuse that the "wind was too gusty." We doubt if he ever intended to fly. So the children were greatly disappointed. Received letter from Eunice and wrote to the children in the East. (T.S.R. 54. 2 P.M. 73. S.S. 58.)

May 14. Mon. Dean Webster is today twentyone years old. He is a student in Worcester Mass. Polytechnic Institute, and very smart and enterprising - stands high in his studies - electrical - making a fine record. Hannah, Laura, Mrs. Platt Smith started to the State S.S. Convention - Jubilee - in Oakland with Rev. Sahlstrom in his auto. Have written to Portland. (T.S.R. 44. 2 P.M. 68. S.S. 58.)

May 15. Tues. Received Post-Card from Susie P. Cornish, who has come to see Webster Parker graduate from the University, and to attend the tenth anniversary celebration of her own graduation from the same, and proposes to visit us on her way home. George came in. (T.S.R. 42. 2 P.M. 68. S.S. 58.)