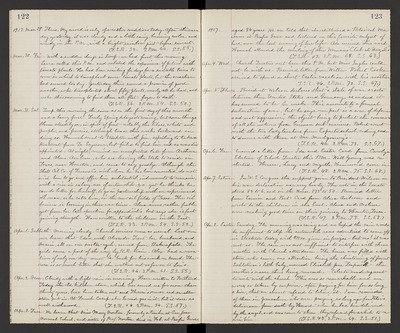 Mar. 30. Friday. With a sudden change in temp. we had frost this morning. Laura called this P.M. and related the experience of Julius with tomato plants. He had been waiting for days for a suitable time to come in which to transplant some tomato plants, but the weather had seemed too dry. Yesterday there seemed a promise of good weather, so be transplanted about fifty plants, nearly all he had, and woke this morning to find them all flat frozen to death. (T.S.R. 36. 2 P.M. 54. S.S. 50.)

Mar. 31. Sat. Temp. this morning the same as on the first day of this month and a heavy frost. Truly Spring delay its coming, but some things bloom steadily on, in spite of frost - notably the lilacs, white and purple, and freesias, although two or three weeks backward in doing so. Hannah went to Stockton with Jim. expecting to take a treatment from Dr. Seymour, but failed to find him, and so was disappointed. At night, received an unexpected call from Arthur and Alma Ambrose, who are leaving the State to reside in Texas, near Houston, and came to say goodbye. Although the Shell Oil Co. of Fresno Co. with whom he has been connected, do not wish him to go, and offer him substantial inducements to remain, with a rise in salary, use of automobile, &.c. yet he thinks he can do better for himself, to go in partnership with an experienced ill man, as he calls him, in the new oil fields of Texas - The oil business is booming in these war times. Alma seems rather feeble yet from her late operation for appendicitis, but says she is fast gaining strength. Have written to the children in the East. (T.S.R. 33. 2 P.M. 54. S.S. 52.)

Apr. 1. Sabbath. Morning cloudy. Church services were as usual. Last eve we learn that Edna, with Alexander Trent her husband, and Marie, all on one motor-cycle, arrived from Bakersfield. The girls came a part of the way by R.R. train. Alex - had a vacation of only one day - must be back for his work on Mond. Theresa is so much better that she walked out as far as to Lou's. (T.S.R. 46. 2 P.M. 61. S.S. 55.)

Apr. 2. Mond. Cloudy with a light rain in morning. Have written to Portland. Today the old kitchen stove, which has served us for more than thirty years, has been taken out and Theresa's newer and smaller stove put in. At French Camp she burned gas in it, but it does as well with wood. (T.S.R. 46. 2 P.M. 54. S.S. 57.)

1917. aged 84 years. We are told that she established a Botanical Museum at Pacific Grove and lectured on this favorite subject of hers, even the last evening of her life. Ada received this word Hannah attended the meeting of the Woman's Club at Hazel's. (T.S.R. 42. 2 P.M. 68. S.S. 63.)

Apr. 5. Thurs. President Wilson declares that "a state of war exists between these United States and Germany, as indeed it has seemed to be for weeks. This amounts to a formal declaration of war, but he says our part is a "war of defense and not aggressive", the object being to protect the commercial of all the nations from German sub-marines. Robert went with the two lady teachers from Esparto school, riding and to dinner with them at Mr. Montgomery's. (T.S.R. 46. 2 P.M. 73. S.S. 67.)

Apr. 7. Satur. In U.S. Congress the support given to President Wilson in his war declaration war very hearty. The vote in the Senate stood 82 to 6, and in the House 373 to 50. Received letter from Eunice and Post-Card from Alma Ambrose and wrote to the children in the East. Alma and Arthur were making good time in their journey to Houston, Texas. (T.S.R. 47. 2 P.M. 73. S.S. 58.)

Apr. 8. Easter Sunday. The morning was rainy and we hoped the rain would be sufficient to stop the automobile races advertised to come off in Stockton today with $1500. given in prizes, but no! it was not so. The rain was not sufficient to interfere with them neither with Church attendance. The house was filled with those who came, one attraction being the christening of Janet Sahlstrom's little baby, named Elisabeth Jane Doupnik, the mother's name thus being reversed. Celeste made request to unite with the church. This was so remarkable, and we were so taken by surprise, after praying for him for so long a time, that we almost refused to believe it. I am reminded of those in Jerusalem who were praying so long ago for Peter's deliverance from death by Herod - when he had been delivered by the angel, and was come to them. they refused for awhile to receive him. (T.S.R. 48. 2 P.M. 64. S.S. 51.)