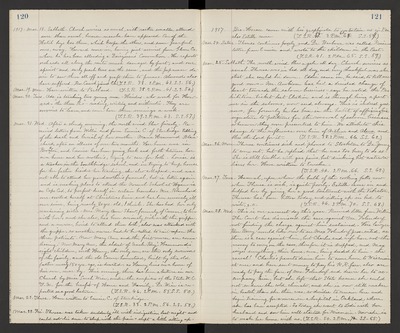 1917. Mar. 18. Sabbath. Church services as usual, with rather smaller attendance than usual, because measles have appeared. One of the Hatch boys has them, which keeps the others, and some fearful ones, away. Howard came in, having just arrived from Glenn Co. where he has been attending a Dairymen's Convention. He reports orchards all along the route much damaged by frost, and our apricot and early peach trees are the same, and the Japanese desire to saw them all of and graft them to prunesl Almonds also have suffered. Rev. Cusick joined Ch. (T.S.R. 38. 2 P.M. 63. S.S. 56.)

Mar. 21. Wed. After a cloudy morning, the north wind blew fiercely. Received letters from Willie and from Eunice C. of Sturbridge telling of the death and burial of her mother - Maria Hammond Blanchard, after an illness of over two months. Her home was in Brockton, and Eunice has been going back and forth between her own home and her mother's, trying to care for both. Louise is a teacher in the Southbridge school, and trying to keep house for her father besides her teaching, she also collapsed, and was not able to attend her grandmother's funeral, but is better again and is making plans to attend the Normal School at Hyannis on Cape Cod, to perfect herself in certain branches. Mrs. Blanchard over-exerted herself at Christmas time, and has been seriously ill ever since, being nearly 80 yrs. old, I think. She has had her only remaining sister - Mrs. Mary Ann Shaw, formerly of Carver, to live with her, and she also, has been seriously sick with the grippe, and a nurse, hired to attend them both, also was attacked with the grippe, so another nurse had to be called to wait upon the three patients. Now Mary Ann and the first nurse are convalescing. Now, Mary Ann, the eldest of Uncle Benj. Hammonds' eight children, with Henry, the only son, are the only survivors of the family, and the old Carver homestead, built by the old father nearly 150 yrs-ago, is deserted, as Henry lives in a home of his own, near by. This evening, there has been a lecture in our Church by Miss Sarah Wise, under the auspices of the State W.C. T.U. for the benefit of Home and Family. Dr. Wise is reported as a good lecturer. (T.S.R. 46. 2 P.M. 55. S.S. 50.)

Mar. 23. Fri. Theresa was taken suddenly ill with indigestion last night and could not lie down to sleep with the pain - slept a little sitting up.

Mar. 25. Sabbath. The north wind blew a gale all day. Church services as usual. Theresa was in bed all day and very thankful was she that she could lie down. Eddie came in, he said, to tell me good news. - Mr. Ambion has had a decided change of heart towards the saloon business - says he voted the Prohibition ticket last Election and is through being a partner in the saloons, now and always. This is indeed good news, for formerly he has been in the habit of affixing his signature to petitions for the renewal of saloon licenses whenever they were presented to him. We attribute this change to the influence over him of Arthur and Alma and bless the Lord for it. (T.S.R. 38. 2 P.M. 66. S.S. 62.)

Mar. 28. Wed. This is our warmest day this year. Received letter from Willie. The Court has dismissed the case against Mr. Folendorf not finding the charge against him sustained. His lawyer Ben Berry would like now to see Max Folendorf prosecuted, as there is a case against him, but Charles and wife have not the money to carry on the case, therefore it is dropped, and Max seizes everything, their home, even, being deeded to him - the rascal! Charles's parents desire him to come home to Wisconsin at once and have sent money to pay his R.R. fare, also are ready to pay the fare of Mrs. Folendorf, and desire her to accompany him, but she left that State because she could not endure the cold climate, and she is now still weaker in health than she then was, so decides to remain here and begin training for a nurse in a hospital in Oakland, where she has been accepted. So today she went to Lodi with her husband and saw him well started for Wisconsin. Now she is to make her home with us. (T.S.R. 50. 2 P.M. 71. S.S. 65.)