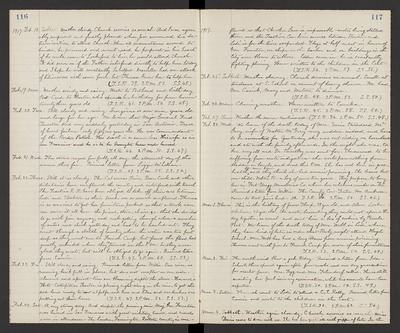 1917. Feb. 18. Sabbath. Weather cloudy. Church services as usual. And I was agreeably surprised and greatly pleased when Jim announce his determination to attend Church - When all circumstances seemed to hinder, he persevered and went - said he purposed in his heart if he could come to Lockeford to live, he would attend Church. It did seem as if the Father interfered directly to help him today and I hope he will constantly be helped. Marcella had an attack of biliousness with some fever, but Theresa knew how to help her. (T.S.R. 39. 2 P.M. 51. S.S. 45.)

Feb. 20. Tues. Still cloudy and rainy. Georgiana is now nine years old and large for her age. We learn that Major General Fred Tunston died very suddenly yesterday in San Antonio, Texas of heart failure - only fiftyone years old. He was Commandant of the Border Patrol. His death is a severe loss. His wife is in San Francisco and he is to be brought here and buried. (T.S.R. 46. 2 P.M. 50. S.S. 47.)

Feb. 22. Thurs. Still it is cloudy. The Calaveras River, Bear Creek and other tributaries have overflowed the country and interfered with travel. The Traction R.R. have been obliged to take off their cars between Lodi and Stockton as their tracks are so much overflowed. Theresa is so anxious to get her furniture packed so that a truck van can move it all here - the pianos, stove, chairs, &.c. - that she decided to go with Jim, anyway, and risk getting through where a number of autos were stuck yesterday and had to be hauled out. They went through a stretch of country where the water was two feet deep as they went over to French Camp, but found the flood had greatly subsided when they returned in the P.M. So they were glad they went, but will be obliged to go again. Received letter from Eunice. (T.S.R. 47. 2 P.M. 60. S.S. 53.)

Feb. 23. Fri. Still cloudy and rainy. Received letter from Willie. Our river is running bank full in places, but does not overflow on our side. Almond and apricot trees are blooming despite the storm. Howard's Holt Caterpillar Tractor is plowing right along in the rain, to get the sod land ready to saw alfalfa and trees and lilac and rose bushes are putting out their leaves. (T.S.R. 47. 2 P.M. 52. S.S. 53.)

Feb. 24. Sat. A very stormy day. And despite the pouring rain. Maj. Gen. Funston was buried in San Francisco with great military honors, and crowds were in attendance. The Linden, Farmington, Bellota Country is overflowed

1917. so that Cherokee Lane is impassable - autos being stalled there, and the Traction Car line service between Stockton and Lodi is for the time suspended. Flags at half-mast in honor of Gen. Funston, on ships in the harbor and on buildings in the City were blown to ribbons. Eddie came in, he is constantly fighting pleurisy. Have written to the children in the East. (T.S.R. 54. 2 P.M. 57. S.S. 56.)

Feb. 28. Wed. We learn of the death today of Mrs. Susie Stoddard McGary, wife of Walter McGary - very sudden indeed, and hard to be accounted for. Yesterday she was out riding on horseback and ate with the family afterwards. In the night she was taken very ill and Dr. Priestly was sent for. She seemed to be suffering from acute indigestion - she could pass nothing from bladder or bowels, and died this P.M. She has not been in good health for some time and they think she had uremic poisoning. She leaves but one child, Walter R. - a boy of some ten years. They propose to bury her in Fort Bragg, Mendocino Co. where her relatives reside on Fri. Received a letter from Willie - The County Cow-Tester, Mr. Ambrose, came to test Jim's herd. (T.S.R. 33. 2 P.M. 50. S.S. 46.)

Mar. 1. Thurs. This is the birthday of James Thorp, 38 yrs. old, and Alma Locke Ambrose, 26 yrs. old. She wrote, lamenting they could not spend the day together, as usual and sent him a box of cookies by Parcels Post. We learn of the death today of Mrs. Webb, in Lodi, where they have lived of late, in order that Ruby might attend High School - Mrs. Webb has had a long illness from uremic poisoning. Theresa went with Jim to French Camp for more of their furnitures. (T.S.R. 33. 2 P.M. 50. S.S. 49.)

Mar. 2 Fri. The north wind blew a gale today. Received a letter from Ida - Schools there opened again after four weeks and one day quarantine for scarlet fever. Mrs. Fogg and Mrs. Folendorf called. He is still waiting his preliminary examination, while his accounts have been experted. (T.S.R. 30. 2 P.M. 54. S.S. 49.)

Mar. 4. Sabbath. Weather again cloudy. Church services as usual. Miss Davis came to dine with us. She has been quite ill with grippe of late. In the