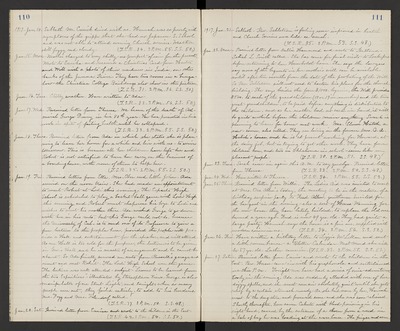 Jan. 15. Mon. Weather changed to very chilly - no prospect of rain for the present Wrote to Eureka and received a Christmas Card from Hester and Will with a photo of their residence in India, on the banks of the Jumna River. They have two rooms in a bungalow - the Christian College Buildings also show in the picture. (T.S.R. 31. 2 P.M. 56. S.S. 50.)

Jan. 18. Thurs. Received letter from Ada in which she states she is planning to leave her home for a while and live with us - to arrive tomorrow. This is because all the children have left her and Robert is not satisfied to have her carry on the business of a boarding house, with none of them to help her. (T.S.R. 35. 2 P.M. 55. S.S. 50.)

Jan. 19. Fri. Received letters from Etta, Mrs. Ober and little John. Ada arrived on the noon train. She had made an appointment to meet Robert at Lodi this evening. The Esparto High School is scheduled to play a basket-ball game with Lodi High this evening, and Robert must chaperone his boys to Lodi and wishes to meet his mother there. Ada wished George to go down write her in his auto, but this George could not do, because the University of Cal. is to send one of its Professors to give a free lecture to the people here, provided the people will provide a Hall and entertainment for the speaker, and will attend. As our Hall is too cold for the purpose, the lecture is to be given in Geo.'s Hall, and he is master of arrangements and he cannot be absent. So Ada finally secured an auto from Russell's garage and went and met Robert. The Lodi High School won the game. The lecture was well attended - subject - "Lessons to be learned from the two Expositions" - illustrated by Stereopticon Views. George is also manipulator of our Street Lights, and tonight, when so many people were out, they failed entirely, to add to his burdens. Mrs. Fogg and Mrs. Folendorf called. (T.S.R. 37. 2 P.M. 50. S.S. 48.)

Jan. 22. Mon. Received letter from Nellie Hammond and wrote to Portland. Sarah L. Smith called. She has come for final visits - to Lockeford before returning to her Humboldt home. She says the lawyers say none of the bequests in her mother's will can be available until after ten months from the date of the probating of the Will. So Rev. Sahlstrom will not need to hasten his plans for the church building. She says besides the four $1000. legacies, the Will provides $500. to each of the grand children (18 or 19 in number) and the two great-grand children, to be paid before anything is distributed to the children, and as her mother had no cash in hand, it will be quite awhile before the children receive anything. Sarah is planning to leave for home next week. Mrs. Elmer Hatch, a new - comes, also called. They are living in the former Mrs. C.A. Hatch's house, and he is at present working for Howard, at the dairy job, but is trying to get other work. They have four children here, and two in Oklahoma in school - seem like very pleasant people. (T.S.R. 30. 2 P.M. 51. S.S. 48.)

Jan. 25. Thurs. Received letter from Willie. The Ladies Aid was invited to meet at Mrs. Ora Allen's today, the meeting to be in the nature of a birthday surprise party to Fred, Allen, gentlemen invited for the banquet in the evening - also a sort of House - Warming for the new house they have lately builded, to replace the old one burned a year ago. Fred is now 49 yrs-old. They had quite a large party. Hannah says the house is a fine one, supplied with modern conveniences. (T.S.R. 34. 2 P.M. 56. S.S. 52.)

Jan. 27. Satur. Received letter from Eunice and wrote to the children in the East. Bro. Horace came in with his graphonola and entertained us this P.M. Tonight we have had a series of mis-adventures. - Early in the evening, Ada was suddenly attacked with one of her dizzy spells, and she must remain absolutely quiet until she gets relief by a certain stomach remedy - As she had none by her, Hannah went to the drug-store and procured some and she was soon relieved. Shortly thereafter, here came Celeste with blood-poisoning in his right hand, caused by the entrance of a thorn from a weed in a bale of bay he was loading at the warehouse. The finger and arm