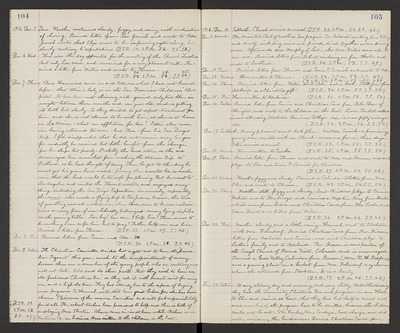 1916. Dec. 5. Tues. Weather continues cloudy, foggy and rainy, with indications of clearing. Received letter from Bro. Josiah and wrote to Ada. Josiah writes that Eliza seems to be improving right along, but slowly - contrary to expectations. (T.S.R. 50. 2 P.M. 56. S.S. 50.)

Dec. 7. Thurs. Clara Hammond came in and told me what I had not heard before - that Alice's baby is in the San Francisco Children's Hospital. It has been not striving well - gained only two lbs - in weight between three months and one year old, and is getting its teeth but slowly. So they decided to get expert treatment for him, and she is not allowed to be with him, so she is at home in Le Moine - what an affliction for her! Eddie also came in having returned too soon - last Tues. - from his San Diego trip. I feel disappointed that he did not remain away longer for evidently he received but little benefit from the change, for he sleeps but poorly. Probably the hard storm on the sea discouraged him somewhat from making the steamer trip to Portland, as he had thought of doing. Then he got to thinking he must get his grain land seeded, fearing there would be so much rain that the land would be too soft for plowing. But he went to Los Angeles and visited the Stewart sisters, and enjoyed everything, including the San Diego Exposition, immensely, especially the music - also made a flying trip to Tia Juana, Mexico, the town of gambling and all wickedness, where there seem to be no restrictions on every form of vice - liberally patronized - money lying in piles on the gaming tables. Poor boy! how can I help him? There seems to be nothing I can do for him but to pray! Father, help me and him. Received a letter from Theresa. (T.S.R. 32. 2 P.M. 49. S.S. 45.)

Dec. 9. Satur. The Christmas Committee decided last night not to have the "Jerusalem Pageant" this year, much to the disappointment of many, because there are a number of the young people who are contrary and will not take hold and do their parts. But they wish to have an "old-fashioned Christmas tree", as they call it, with presents on it for every one and a high old time. They had already been to the expense of buying more programs. So Hannah will still have great labor, for she has been chosen Chairman of the various Committees and will feel responsibility for it all. The school-teachers have promised to help and there is talk of employing Mrs. Struter. Alma came in - is at home while Arthur is in Ventura Co. on business. Have written to the children in the East. (T.S.R. 32. 2 P.M. 50. S.S. 47.)

Dec. 11. Mond. The Ministers Club of Northern San Joaquin Co. held its meeting here today and twenty, including wives and friends, dined together in our diningroom. Afterwards Mrs. Murphy of Lodi, also Mrs. Willis came up to see me. Received letters from Robert, inclosing one from Hester and wrote to Portland. (T.S.R. 34. 2 P.M. 53. S.S. 49.)

Dec. 21. Thurs. Weather still foggy and cloudy. Sent Christmas pkgs. to Eunice Webster and to Sturbridge and received a Napkin-Ring from Hester which came from India, and Christmas Cards from Etta Locke, and Edna Trent, and $ Two from Willie. (T.S.R. 36. 2 P.M. 46. S.S. 46.)

Dec. 22. Fri. Weather cloudy and a little rainy. Hannah went to Stockton with Mrs. Folendorf. Received Christmas Card from Rev. Kidder, letters from Adelaide and Eunice, and sent Christmas pkgs. to Luther's family and to Adelaide. Rev. Kidder is now pastor of the Cong'l Church of Buena Vista, Colorado, and is encouraged. Received a Grass Valley Calendar from Beacon (Mrs. R.H. Bedford) and a growing plant in a basket from Mrs. Folendorf - a cyclamen when she returned from Stockton - It is a beauty. (T.S.R. 37. 2 P.M. 46. S.S. 46.)

Dec. 23. Satur. A very stormy day and evening, and very chilly. Notwithstanding they had the Community Christmas Tree and program in our Hall. It blew and rained so hard, that they had but half a crowd and some numbers of the program had to be omitted, because the children could not be out - The teacher, Mr. Cordoza, had charge, and did well, considering the hindrances. Received Christmas Cards from