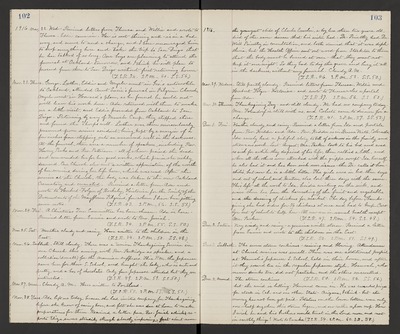 1916. Nov. 22. Wed. Received letters from Theresa and Willie and wrote to Theresa - Eddie came in. He is not striving well - is in a bad way, and seems to need a change, and I have encouraged him to drop everything here and take the trip to San Diego that he has talked of so long. Our boys are planning to attend the funeral at Oakland tomorrow, and I think he will plan to proceed from there to San Diego without first returning home. (T.S.R. 34. 2 P.M. 60. S.S. 56.)

Nov. 23. Thurs. George, Luther, Eddie and Myrle went in Geo.'s automobile to Oakland, attended Aunt Susie's funeral in Pilgrim Church. Myrle went in Howard's place, as he found he could not well leave his work here - Ada returned with them to make us a little visit, and Eddie proceeded from Oakland to San Diego. Returning by way of French Camp, they stopped there and found the Thorps well. Luther was there miraculously preserved from serious accident, being kept by a margin of a few inches from stepping into an uncovered well in the darkness. At the funeral, there were a number of speakers, including Rev. Harry Perks and Rev. Patterson - all of whom praised the dead and commended her for her good works, which praise she richly deserved. Our Church also sent a written appreciation of the worth of her services, during her life here, which was read. After the services at the Church, the body was taken to the new Oakland Crematory and cremated. Received a letter from Ada and wrote to Herbert Folger of Berkeley, Historian for the Society of the "Descendants of the Mayflower Pilgrims", for whom I have been jotting some notes. (T.S.R. 43. 2 P.M. 56. S.S. 51.)

Nov. 26. Sabbath. Still cloudy. There was a Union Thanksgiving Service in our Church this evening, with Rev. Partridge as speaker and a collection (small) for the Armenian sufferers. This P.M. the Japanese came here for their S. School, and brought the body, who is cute and pretty, and a box of chocolates. Only four Japanese attended but they are interested. (T.S.R. 49. 2 P.M. 59. S.S. 50.)

Nov. 28. Tues. Ada left us today because she had invited company for Thanksgiving before she knew of coming here, and felt she was due at home to make preparations for them. Received a letter from Bro. Josiah which reports Eliza seems steadily though slowly improving just about noon

1916. the youngest child of Charles Emslie, a boy less than two years old, died of the same disease that his sister had. Dr. Priestley had Dr. Will Priestley in consultation, and both denied that it was diphtheria, but the Health Officer sent out word from Stockton to them that the body must be buried at once that they must not keep it overnight. So they had to dig the grave and bury it all in the darkness, without any funeral. Cloudy A.M. (T.S.R. 46. 2 P.M. 52. S.S. 50.)

Dec. 1. Fri. Weather cloudy and rainy. Received a letter from Ida and postals from Rev. Kidder and Ada - Rev. Kidder, in Buena Vista, Colorado. Ida surely had a pitiful story to tell of sickness in the family and strenuous work - Last August, Mr. Parker took to his bed and was so sick for awhile they despaired of his life, then rallied a little, and when all the others were attacked with the grippe except Ida herself he also had it and has been sick ever since the Dr. calls it bronchitis, but now he is a little better. The girls were in bed three days and out of school, and Benton also lost three days with the same. This left all the work to Ida, besides waiting on the sick, and since there has been the harvesting of the fruit and vegetables and the dressing of chickens for market. The day before Thanksgiving she had orders for 36 chickens at once and had to keep Carolyn out of school to help her. All now are in usual health except Mr. Parker. (T.S.R. 47. 2 P.M. 54. S.S. 48.)

Dec. 3. Sabbath. The severe storm continues - raining and blowing. Attendance at Church services was small. There was one additional pupil at Hannah's Japanese S. School, held in their house, and after it they served tea in the regular Japanese style. Hannah, who never drinks tea, did not partake, and the others marveled. (T.S.R. 50. 2 P.M. 56. S.S. 56.)

Dec. 4. Mond. The storm continues but the wind is lulling. Howard came in - He was awarded prizes for stock in Cal. and one other State - Arizona, I think - but the money has not been yet paid. Potatoes on the lower bottom were only one-half dug when this storm began, and are rather a poor crop. How I wish he and his brothers would trust in the Lord more and not in earthly things! Wrote to Eureka. (T.S.R. 54. 2 P.M. 60. S.S. 58.)