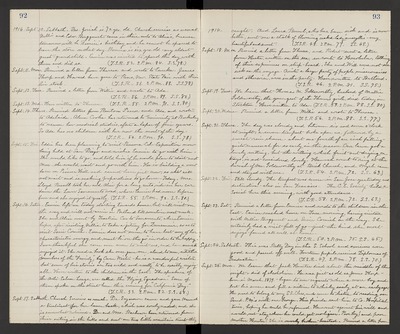 Sept. 14. Thurs. Received letters from Benton Pascoe and Ada and wrote to Adelaide - Alma Cooke has returned to University at Berkeley to resume her medical studies, after a lapse of five years. So Ada has no children with her now the most of the day. (T.S.R. 54. 2 P.M. 90. S.S. 78.)

Sept. 15. Fri. Eddie has been planning to visit Panama-Cal.-Exposition now being held at San Diego and wishes Eunice to go with him. She would like to go, and told him if he would plan to start next Mon. she would wait and go with him. He is building a new barn on Pioneer Hill and cannot leave just now, so she will not wait and is making preparations to go home - Today, Mrs. Lloyd Russell took her and Alice for a long auto ride in her car down the Lower Sacramento road, where Eunice had never before been and she enjoyed it greatly. (T.S.R. 55. 2 P.M. 92. S.S. 80.)

Sept. 16. Satur. Eunice left us today starting towards home, but will visit on the way and will not arrive on Portland till sometime next week. She and Alice went by Traction Car to Sacramento, where Eunice hopes, after visiting Nellie, to take a jitney for Dunsmuir, so as to visit Susie Cornish. Eunice does not seem to have lost any of her characteristic energy, and must be "on the go" in order to be happy. I am thankful she came once more to visit us, and have much enjoyed it. She read a book she once gave me, aloud to me, entitled "Members of the Family", by Owen Wister - he is a wonderful writer but some of his stories are "too wild and woolly" to be exactly enjoyable. Have written to the children in the East. The speakers of the Anti-Saloon Leage, are called the "Flying Squadron". Some of them spoke on the street here this evening for "California Dry". (T.S.R. 53. 2 P.M. 82. S.S. 68.)

Sept. 17. Sabbath. Church Services as usual. Dr. Seymour came and gave Hannah a treatment for her lame back, which was sorely needed, and she is somewhat relieved. Dr. and Mrs. Barbour have returned from their outing in the hills and sent me two little mountain trout they

Sept. 18. Mon. Received a letter from Theresa, and Robert sent a letter from Hester, written on the sea, en route to Honolulu, telling of their experiences on ship-board. She and Will were not sea sick on the voyage. Quite a large party of people, missionaries and otherwise, were in the party. Have written to Portland. (T.S.R. 46. 2 P.M. 81. S.S. 75.)

Sept. 21. Thurs. The day was cloudy and between six and seven o'clock at night, a severe tempest broke upon us, followed by a smart rain shower - about one-fourth of an inch falling - quite unusual for so early in the season. Our lawn got a lovely wetting, but the wetting which fruit and drying on trays, is not considered lovely. Hannah went to sing at the burial of Mr. Goldsworthy at Brick Church, and Myrle came and stayed with me. (T.S.R. 54. 2 P.M. 72. S.S. 63.)

Sept. 23. Sat. Received a letter from Eunice and wrote to the children in the East. Eunice reached home on Tues. morning, having visited with Nelli Bergquest and Susie Cornish on the way. She certainly had a visit full of go - just the kind she most enjoys - found all well at home. (T.S.R. 50. 2 P.M. 75. S.S. 65.)

Sept. 25. Mon. We learn that Jack Hunter died about the middle of the night - died of alcoholism. He was just as old as James Thorp - born in March, 1879. - began to use cigarets when a mere boy, and lost his sense and fell a victim to whisky easily at an early age. He used to belong to my S.S. Class, and come to listen to reading on Sund. P.M.'s with our George. His friends sent him to Co. Hospital twice, hoping he could be reformed. He went again his will and would not stay where he could get no liquor. Poor boy! and poor Mother Hunter! She is nearly broken-hearted. Received a letter from