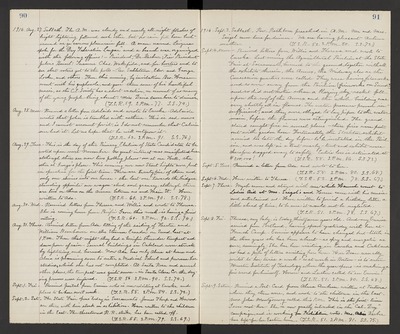 1916. Aug. 27. Sabbath. The A.M. was cloudy and nearly all night flashes of bright lightning followed each other, but no rain fell here but around us in various places rain fell. A man named Laizurs spoke for the "Dry Federation Leagae" and a branch was organized with the following officers: - President, Dr Barbour; Vice President Julius Bruml; Treasurer Chas. Wakefield, and for boosters and to see that voters get to the polls - Rev. Sahlstrom, Edw. and George Locke, and others. Then this evening, by invitation Bro. Horace went with his graphonola, and gave them some of his beautiful music, at the C.E. Society has a short vacation, on account of so many of the young people being absent - Miss Davis came here to dinner. (T.S.R. 59. 2 P.M. 77. S.S. 74.)

Aug. 28. Mon. Received a letter from Adelaide and wrote to Eureka. Adelaide writes that John is troubled with asthma. This is sad news and I cannot account for it, is I do not remember that Calvin ever had it. Let us hope that he will outgrow it. (T.S.R. 62. 2 P.M. 91. S.S. 76.)

Aug. 29. Thurs. This is the day of the Primary Election of Slate Candidates to be voted upon next November. No great interest was manifested here although there are now two polling places - one at our Hall, the other at George's place - This evening our new Street Lights were put in operation for the first time. There are twentyfive of them and only one shines into our house - The last one towards the bridges, standing opposite our wagon-shed and granary, although there are two or three on the Avenue between us and Main St. Have written to Ada. (T.S.R. 60. 2 P.M. 90. S.S. 78.)

Aug. 31. Thurs. Received letter from Ada telling of the sailing of Hester and William Bembower on the Steamer Ecuador on Sund. last at 1 P.M. Then that night they had a terrific thunder tempest and down pour of rain. Several buildings in Oakland were struck by lightning and burned. Now Ada has only Alma at home and Alma is planning soon to enter a Medical School and pursue her studies, which she has not completed. At Santa Rosa and several other places, tempest was quite severe - in Santa Clara Co. the drying prunes were injured. (T.S.R. 56. 2 P.M. 90. S.S. 74.)

Sept. 2. Sat. The State Fair opens today in Sacramento. James Thorp and Howard are there with live stock on exhibition. Have written to the children in the East. The threatened R.R. strike has been called off. (T.S.R. 55. 2 P.M. 79. S.S. 69.)

Sept. 4. Mon. Received letters from Willie and Theresa and wrote to Eureka. Last evening the Agricultural Pavilion at the State Fair at Sacramento, burned to the ground, together with all the exhibits therein, the Annex, the Midway also as the Consession quarters were called. They were having fireworks and so were away from the Pavilion (fireworks on Sund.) and so did not notice when a blazing sky-rocket fell upon the roof of the Annex and the whole building was very shortly all in flames. The water pressure proved insufficient, and they were obliged to lay pipes to the water main, before the flames were extinguished. The grandstand caught fire in several places - these fires were put out with garden hose. Fortunately the Stockton exhibit arrived too late the day before to be installed in the Pavilion, and was left in a tent nearby - tent and exhibit were therefore dragged away to safety. Entire loss is estimated at $200,000! (T.S.R. 55. 2 P.M. 86. S.S. 73.)

Sept. 7. Thurs. Myrle came and stayed with me while Hannah went to Ladies Aid at Mrs. Siegel's and Horace came with his music and entertained us - Have written to Josiah and birthday letter a little ahead of time, to be sure it would not be neglected. (T.S.R. 51. 2 P.M. 78. S.S. 67.)

Sept. 8. Fri. Theresa, my baby, is today thirtyseven years old. And my Eunice arrived from Portland, having spent yesterday with her at French Camp. Eunice appears to have changed but little in the three years she has been absent - as spry and energetic as ever, seemingly. She has been visiting in Eureka and Oakland so had a pile of letters awaiting her here. Her Dean usually writes to her twice a week - is at work in Boston - is to enter Worcester Institute of Technology when the year opens - is making a fine record for himself. Horace and Luther called to see Eunice. (T.S.R. 51. 2 P.M. 80. S.S. 68.)

Sept. 9. Satur. Received a Post-Card from Alma Ambrose written at Ventura where they then were, and wrote to the children in the East. Mrs. John Montgomery called this P.M. This is the first time I ever met her - She is now greatly interested in the "Cal. Dry" campaign, and is working for Prohibition votes. Mrs. Alice Barber has left for her Eastern home. (T.S.R. 51. 2 P.M. 81. S.S. 75.)