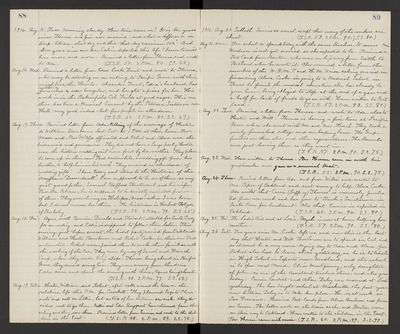 Aug. 16. Wed. Received a letter from Edna Locke Trent and wrote to Theresa who may be starting on an outing to Pacific Grove with their neighbors, the Hoerls - Alexander Trent, Edna's husband, has rented, a furnished new bungalow, and bought a piano of her. His work is in the Bakersfield Oil Fields at good wages. This eve there has been a Musical Concert by the Petersen Sisters in our Hall - very good indeed - but few people in attendance. (T.S.R. 52. 2 P.M. 82. S.S. 67.)

Aug. 17. Thurs. Received letter from Ada, telling of the marriage of Hester to William Bembower last Sat. at 1 P.M. at their home. Rev. Maar and Rev, McAfee officiated, and Robert and Alma were the brides maid and groomsman. They did not have a large party. Hester wore the historic wedding veil worn first by her mother. they plan to come up in their new Ford automobile, a wedding gift from his brother, to help him in his work. They received an abundance of wedding gifts. I have today sent items to the Historian of the "Mayflower Descendants". I am supposed to be one of them, as my great-grandfather, Samuel Stafford Sturtevant and his wife, Priscilla Palmer, he is supposed to be directly descended from one of them. They were living in Halifox, Mass - when I was born but I do not remember them. The historian is Herbert Folger of Berkeley. (T.S.R. 52. 2 P.M. 79. S.S. 65.)

Aug. 18. Fri. Agnes, with Bernice, Donald and Stewart, started for Santa Cruz for an outing, and Eddie is supposed to follow them later. This evening, just before sunset, the bridal party arrived from Oakland - William and Hester Bembower and Robert Cooke, in their new Ford automobile. Robert accompanied them to make them familiar with the working of the Car. They came by way of Sunol and French Camp, where they made brief stops - Theresa, being absent in Pacific Grove, they missed seeing her. They were weary from the drive. Eddie came and spent the evening with them. Agnes being absent. (T.S.R. 48. 2 P.M. 77. S.S. 68.)

Aug. 19. Satur. Hester, William and Robert, after calls around the town on the relatives, left this P.M. for Crockett. They planned to go to Clements and call on Lottie, but as two of her children are sick, they decided not to go there. Nellie and Edw. Bergguest have returned from their outing and they saw them. Received letter from Eunice and wrote to the children in the East. (T.S.R. 48. 2 P.M. 83. S.S. 75.)

Aug. 21. Mon. Our school re-opened today with the same teachers. It seems Miss Woodson is not yet married as she expected to be. Received a Post Card from Benton, who was on his way from Seattle to Portland when he wrote it. Also received a letter from the members of the W.B.M.P. and H.M. Union asking our aid in financing Alma Cooke in going to a Medical School in Texas to finish the medical education she has already begun here, being obliged to stop at the end of a year and a half for lack of funds to go on with. Have written to Portland. (T.S.R. 57. 2 P.M. 93. S.S. 80.)

Aug. 22. Tues. Received a letter from Theresa, and wrote to Ada, also to Hester and Will - Theresa is having a fine time at Pacific Grove where she went with Mr. and Mrs. Hoerl. They took a nicely furnished cottage and are keeping house. The Grupe families are there also, and other acquaintances. The Brumls were just leaving there as they went in. (T.S.R. 57. 2 P.M. 90. S.S. 75.)

Aug. 24. Thurs. Received letters from Ada and from Willie and wrote to Mrs. Piper of Oakland and sent money to help Alma Cooke. Ada writes that Carrie (Geffroy) Thomas is nervously prostrated from over work and has gone to Burke's Sanitarium in Santa Rosa for treatment. Also that Eunice is expected in Oakland. (T.S.R. 60. 2 P.M. 94. S.S. 80.)

Aug. 26. Sat. Two years since Mr. Cooke left us, and now this is the last day that Hester and Will Bembower are to spend in Cal. and so it must be a very nerve-trying day to Ada and Alma, for Robert also had to leave them yesterday, as he is to teach in High School in Esparts near Woodland, and the school is to open next Mond. Olive Montgomery, only daughter of John, is one of the Assistant teacher there, and also goes today - Eunice Condict and Allan Daley were married at Lodi yesterday. She has taught school at Mackville the past year now Lillian Daley is to take her place. He is at work in San Francisco. Received Post-Card from Alma Ambrose and from our Eunice. The letter wrote on the train as she and benton were on their way to Oakland. Have written to the children in the East. Bro. Horace came with music. (T.S.R. 60. 2 P.M. 89. S.S. 79.)