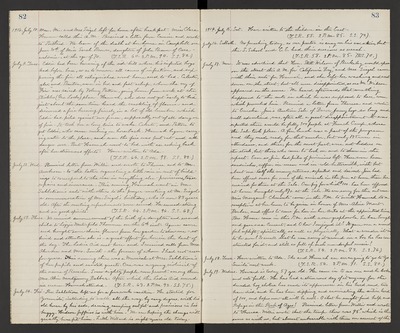 July 11. Tues. Eddie had been burning of the side-hill where his infected hogs had before been, so as to remove all causes of infection, and supposing the fire all extinguished went home and to bed. Celeste, also, and Benton, were in bed and fast asleep, when the cry of "Fire" was raised by Volney Patton, going home from work at the Stickles (Geo. Locke) place. Hannah, who does not get "early to bed" just about the same time heard the crackling of flames and discovered a fire burning fiercely in a lot of old lumber which Eddie had piled against our fence, supposably out of all danger of fire. It took her a long time to wake Celeste, and Patton to get Eddie, who came rushing on horseback. Hannah began carrying water to the place, and soon the fire was put out and all danger over. But Hannah went to bed with an aching back after her strennous efforts. Have written to Ada. (T.S.R. 66. 2 P.M. 98. S.S. 82.)

July 12. Wed. Received letter from Willie and wrote to Theresa and to Mr. Ambrose - to the latter requesting a little raising in rent of buildings to correspond to the rise in everything else - provisions, taxes, repairs and insurance. This evening. Hannah went in Mr. Sahlstrom's auto with others to the prayer-meeting at Mr. Siegel's a commemoration of Mrs. Siegel's birthday, who is now 83 years old. After the meeting refreshments were served. He seemed strong and in good spirits. (T.S.R. 64. 2 P.M. 96. S.S. 68.)

July 13. Thurs. We received announcement of the birth of a daughter and second child to Lizzie Westerfield Thommen on the 6th inst. Agnes came and brought some choice flowers from her garden to show me - so kind and attentive she is - a great effort for her in the heat of the day. The Ladies Aid met here and I received calls from Mrs. Sherden and Mrs. Smith - the former of whom I had not seem for years. This evening there was a Musicals at Mrs. Sahlstrom's of her pupils and invited guests. One was a young violinist of the name of Rausche. Some eighty people were present, among them Mrs. Alice Montgomery Barber. After which the Ladies Aid served ice cream. Hannah attended. (T.S.R. 63. 2 P.M. 92. S.S. 75.)

July 14. Fri. Rev. Sahlstrom left us for a four weeks vacation. He started for Yosemite, intending to walk all the way, by easy degrees, with his old horse by his side, drawing camping outfit and provisions in his buggy. Hudson Jeffries is with him. We are hoping the change will greatly benefit him. Little Willard is eight years old today.

July 17. Mon. It was advertised that Hon. Stitt Wilson of Berkeley would spea on the street this A.M. for "California Dry", and Mrs. Siegel came with their auto for Hannah, and she left her washing and went down on the street, but all were disappointed, as no Mr. Wilson appeared on the scene. We heard afterwards that something happened to the auto in which he was supposed to have come which prevented him. Received a letter from Theresa and wrote to Eureka. Jim's Auction Sale of Duroe Jersey hogs, so long and well advertised, was, after all, a great disappointment. It was expected there would be fully 300 people at French Camp, where the Sale took place. A free lunch was a part of the program and they made ready for that number, but only 135 were in attendance, and these, for the most part, were not bidders on the stock, but those who came to took on and to share in the repast. Even so, Jim had piles of provisions left. There were ham sandwiches, coffee, ice-cream and ice-cold buttermilk, with but about one-half the money returns, expected and desired. Jim had been offered more for some of the animals in the pen at home than he received for them at the Sale. One pig for which $100. has been offered at home brought only $70. at the Sale. We are sorry for this out come. Miss Margaret Clements came in the P.M. to invite Hannah to a reception at her home, to be given in honor of Mrs. Alice Mont. Barber, and offers to come for her in her Auto at the appointed time. Bro. Horace came in the P.M. with a new graphonola he has bought and gave us a Concert, and O how I enjoyed it! It gave me a wonderful uplift, spiritually as well as physically. What a wonder it is to be sure! So small that he can carry it around in a box he has constructed for it, and still so full of such wonderful music! (T.S.R. 54. 2 P.M. 83. S.S. 76.)

July 19. Wednes. Howard is today 57 yrs. old. He came in to see me and he looks and acts feeble. He has had a strenuous day of it any way, for the dreaded hog cholera has made its appearance in his herd, and two have died, and he has been dipping and vaccinating the entire herd of 100, and hopes now all will be well. O that he might find help and Refuge in the Rock of Ages! Received letter from Willie and wrote to Theresa. Willie wrote that the temp. there was 95-. which is the same as with us, but almost unbearable with them on account of the