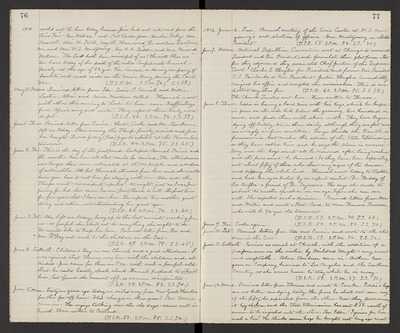 1916. could not be here today because Jim had not returned from the Chico Fair - Rev. Wallace, and Post Cards from Amelia Daley, Mrs. Maxwell, Alice H. Petch, Myrtle Hammond, Dr. and Mrs. Barbour, Mr. and Mrs. W.S. Montgomery, Rev. A.A. Kidder, and Mrs. Minard. Wallace. "The Lord hath been mindful of us! He will bless us." We learn today of the death of the noted Confederate General - Mosby - at the age of 82 yrs. He headed a daring company of bandits, and made raids on the Union Army during the Civil War. (T.S.R. 41. 2 P.M. 74.) S.S.58.)

May 31. Wednes. Received letters from Ida, Susie P. Cornish and Willie. Luther, Alice and Miss Woodson called. Hannah went with others this evening to Lodi to hear some Kaffir Boys from Africa sing and recite. They report them truly wonderful. (T.S.R. 48. 2 P.M. 72. S.S. 59.)

June 2. Fri. This is the day of the postponed Lockeford Annual Picnic and the weather has been all that could be desired. The attendance was larger than ever, estimated at 15,000 people and a cordon of automobiles. All but Hannah attended from here and she would have gone had it not been for staying with me - Ada and the Thorps went - no accidents reported. At night, just as I was preparing for bed, here came Emma (Kerr) Hurd to call - the first time for four years that I have seen her. She reports her mother quite strong and active, notwithstanding her great age. (T.S.R. 46. 2 P.M. 76. S.S. 60.)

June 4. Sabbath. Children's Day in our Church and a good attendance. I was rejoiced that Theresa was here with the children and attended - Jim came for them in P.M. with such a fearful cold that he could hardly speak aloud - Hannah proposed to vibrate him, but found the current off, so we were disappointed. (T.S.R. 48. 2 P.M. 83. S.S. 70.)

June 5. Mon. Sixtyone years ago today we sailed away from New York Harbor for this far-off home. What changes in these years! Bro. Horace came in. He enjoys talking over the old days - seems well in health. Have written to Portland. (T.S.R. 53. 2 P.M. 85. S.S. 74.)

June 7. Wednes. National Republican Convention met at Chicago to nominate President and Vice President, and formulate their platform. Before they adjourned they nominated Chief Justice of the Supreme Court. Charles E. Hughes for President and former Vice President C.S. Fairbanks as Vice President. Justice Hughes immediately resigned his office and accepted the nomination. This is our hottest day thus far. (T.S.R. 62. 2 P.M. 95. S.S. 78.) The Church Trustees met here. Have written to Theresa.

June 8. Thurs. Eddie is having a hard time with his hogs, which he keeps in pens on the side hill below the granary, two hundred or more, and feeds them with skim-milk. They have begun dying off lately, two or three daily, although they are fat and seemingly in fine condition. George thinks the trouble is pneumonia, but wishes the advice of the State Veterinarian so they have called him and he says the place is unsanitary and the hogs must all be removed after being washed and the pens must be burned. So they have been separating out about fifty of those who show any signs of the disease and dipping the whole herd. Hannah went today to Stockton and had her eyes tested by an expert oculist - Dr. Ruddy of Los Angeles - a friend of Dr. Seymour's. He says she needs to submit to another operation on one eye, before she can see well. She expected such a decision. Received letters from Ada and Willie and wrote a Post-Card to Mrs. Frances Russem who will be 92 yrs. old tomorrow. (T.S.R. 57. 2 P.M. 84. S.S. 68.)

June 11. Sabbath. Services as usual at Church, with the addition of a performance on the violin by Mildred Wright - very sweet and acceptable. Alma Ambrose came in - Arthur has gone on Company business to Los Angeles and the Southern Country, so she comes home to stay while he is away. (T.S.R. 58. 2 P.M. 87. S.S. 71.)

June 12. Mond. Received letter from Theresa and wrote to Eureka. Eddie's hogs are no better - are dying daily. He fears he shall not save any of the fifty he separated from the others. Now they pronounce it hog cholera, and the State Veterinarian has sent $56. worth of serum to be injected into the others. Poor Eddie! I grieve for him - such a loss! He thinks some hogs he bought not long ago must