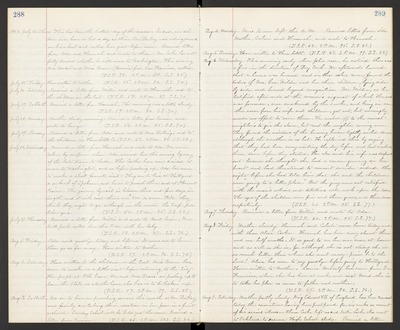 1902. July 24. Thurs. This has been the hottest day of the season. Indeed, we set done ever have so hot a day as this. Rev. DeKay was riding around on his wheel and called here just before noon. Received letters from Ada and Hannah and wrote to them. Mr. Cooke has not fully decided whether he will move to Washington. This evening, Mrs. Norton and Miss Brown (Brownie) from San Francisco, called. (T.S.R. 72. 2 P.M. 110. S.S. 85.)

July 30. Wednesday. Received a letter from Hannah and wrote to Ada. We were taken by surprise when Ada arrived here this evening by way of the late train to Lodi. The Cookes have now decided to move to Washington, and so before packing up, Ada has come to make a short farewell visit. They are to live at Hillyard - a suburb of Spokane, and he is to preach there and at Pleasant Prairie. The journey by rail is between three and four days in length, and it will cost them over $200. to move. Still, they think they might to go, although in the winter the temp. falls below zero. (T.S.R. 54. 2 P.M. 85. S.S. 68.)

Aug. 3. Sabbath. We are to have no preaching services this month as Mr. DeKay and family are taking their vacation in San Jose in a fruit orchard. Sunday School will be held just the same. Received a letter from Eunice. (T.S.R. 65. 2 P.M. 103. S.S. 84.)

Aug. 6. Wednesday. This morning early when John rose, he noticed there was a fire in the direction of Day Creek. We afterwards learned that a house was burned and in the ashes were found the bodies of Mrs. Geo. Wilder and her three children, lying side by side, and burned beyond recognition. Mr. Wilder, as he testified afterwards at the coroner's inquest of which Howard was foreman, was awakened by the smoke, and being in another room from his wife and children, got out, but seemingly made no effort to save them. He rushed off to the nearest neighbor's to give the alarm, but met the neighbor coming over. They found the windows of the burning house tightly nailed down although the weather is so hot. He explained this by saying that they had been away visiting the day before and had nailed them down before they started. He also said his wife was despondent because she thought she had a cancer growing in her breast and had threatened to commit suicide indeed, the night before she had told him that she and the children were "going to a better place." But the jury were not satisfied with the man's actions, and detectives will work upon the case. The ages of the children were five and three years, and three mos. respectively. (T.S.R. 61. 2 P.M. 95. S.S. 77.)

Aug. 8. Friday. Weather cloudy. Hannah and Celeste came home today and with them Alma Cooke. Hannah has been away almost three and one-half months. It is good to see his once more at home and so well as she is, for although she is not strong she is so much better than when she went away - praise be to the Lord! Alma has come to say goodbye before going to Hillyard. Have written to Mother. Louisa Metcalf has come from San Francisco, where she has been at work, and next Mond. she is to take her place as nurse to father and mother. (T.S.R. 65. 2 P.M. 90. S.S. 76.)

Aug. 9. Saturday. Weather partly cloudy. King Edward VII of England has been crowned today, the coronation having been postponed for six weeks on account of his serious illness. Alma Cooke left us and Nellie Locke also went to Oakland to resume High School study. Received a letter