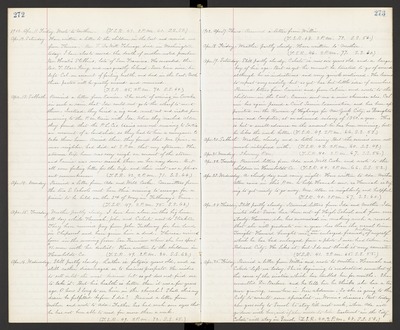 Apr. 12. Saturday. Have written a letter to the children in the East and received one from Theresa. Rev. T. De Witt Talmage died in Washington today. I have also to record the death of another noted preacher Rev. Horatio Stebbins, late of San Francisco. He succeeded the Rev. T. Starr King, and was greatly beloved. Some time since, he left Cal. on account of failing health, and died in the East. Both these pastors will be greatly missed and mourned. (T.S.R. 45. 2 P.M. 70. S.S. 64.)

Apr. 13. Sabbath. Received a letter from Eunice. She wrote of arriving in Eureka in such a rain, that Ida could not go to the wharf to meet them. Instead, they hired a rig and went out and visited from morning to the P.M. train with Ida. When they reached Alton they found that the P.L. Co.'s trains were not running to Scotia on account of a landslide, so they had to hire a conveyance to take them home. Arrived there, they found that Mr. Spires, a near neighbor, had died at 3 P.M. that very afternoon. The steamer trip home was very rough on account of the storm and Eunice was more seasick than on her way down. But all were feeling better for the trip, and their visit was a pleasant remembrance. (T.S.R. 42. 2 P.M. 71. S.S. 64.)

Apr. 15. Tuesday. Weather partly cloudy. I have been alone in this big house all day while Hannah, John and Celeste went to Stockton. They have received pay from John Tretheway for her land in Chaparral and have given him a died. Theresa arrived home in the evening from San Francisco where she has spent $41. more with her dentist. Have written to the children in Humboldt Co. (T.S.R. 49. 2 P.M. 84. S.S. 68.)

Apr. 16. Wednesday. Still partly cloudy. Luther is fortysix years old, and is still rather discouraged as to business prospects. He wishes to sell or let the meal business but as yet does not find one to take it. But his health is better than it was a few years ago. O how I long to see him in the church! Shall this my desire he fulfilled before I die? Received a letter from Mother and wrote to Ada. Father has had such sore eyes that he has not been able to read for more than a week. (T.S.R. 49. 2 P.M. 72. S.S. 65.)

Apr. 19. Saturday. Still partly cloudy. Celeste is now six years old and a large boy of his age. But as yet he cannot be trusted to go of errands although he is industrious and very quick motioned. He learns to repeat very readily but as yet has but little idea of numbers. Received letters from Eunice and from Calvin and wrote to the children in the East. Eunice sent me a nice chemise also. Calvin has again passed a Civil Service Examination and has been appointed on the Bureau of Highways for New York City, as Draughtsman and Computer, at an advanced salary of $1350. a year. This is but a small advance on the amount he has been receiving, but he likes the work better. (T.S.R. 49. 2 P.M. 66. S.S. 53.)

Apr. 24. Thursday. Still partly cloudy. Received letters from Ida and Mother. Ida writes that Susie has been out of High School sick from over study. However she has succeeded in making such a record that she will graduate in a year less than the usual time. Tonight Howard brought me to see an enlarged framed picture of myself which he has had enlarged from a photo I once had taken in Redwood City. He likes it, but I do not think it very accurate. (T.S.R. 41. 2 P.M. 65. S.S. 55.)

Apr. 25. Friday. Received a letter from Willie and wrote to Mother. Hannah and Celeste left us today. She is beginning to understand somewhat of the cause of the sciatica which has troubled her for mouths. She consulted Dr. Barbour and he tells her he thinks she has a tumor growing somewhere in her abdomen. So she is going to the City to consult some specialist in Women's diseases. But today she goes only to Sunol to stay till next week, when Ada will go down with her, and if she needs to take treatment in the City Celeste will stay in Sunol. (T.S.R. 40. 2 P.M. 68. S.S. 58.)