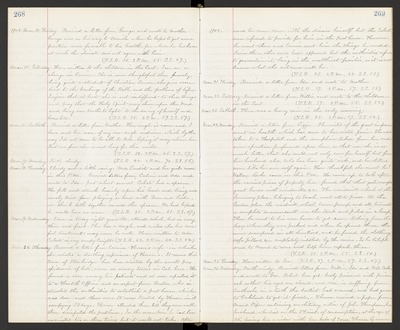 Mar. 15. Saturday. Have written to the children in the East. I can see a change in Eunice. She is more thoughtful than formerly, being quite a student of Christian Science, she gives more heed to the teachings of the Bible and the problems of life. I rejoice that, at least, she is not in different to these things and pray that the Holy Spirit may "shine upon the Word and bring new truths to light" to the saving of herself and household. (T.S.R. 35. 2 P.M. 59. S.S. 57.)

Mar. 18. Tuesday. Cloudy and a little rainy. Mrs. Condict and her girls came in this P.M. Received letters from Calvin and Ada and wrote to Ida. Just about sunset Celeste had a spasm. he fell and struck heavily his head, and being nervously tired from playing so hard with Dean and Locke, we think both together caused the spasm. We had hoped he would have no more. (T.S.R. 41. 2 P.M. 61. S.S. 47.)

Mar. 20. Thursday. Received a letter from Eunice - Horace's wife in which she relates a startling experience of Horace's. It seems their town of Sturbridge has been visited by the small-pox epidemic of late, even as many towns in Cal. have. He found a case among his patients and at once reported it to a Health Officer and an expert from Boston, who instructed the authorities to establish a pest house, which was done, and there were 18 cases treated by Horace in it occupying 33 days. Horace attended them till they were well then disinfected the pest house. In the mean time he had been vaccinated two or three times but it would not take. Afterwards

1902. he came down with the disease himself but the Selectmen refused to provide for him in the pest house. However he went there and Eunice sent him the things he needed. Since then, other cases have appeared but the authorities refuse to quarantine it, being in the wealthiest families, so it is not known what the outcome will be. (T.S.R. 43. 2 P.M. 64. S.S. 51.)

Mar. 24. Monday. Received a letter from Lazzie. She writes of the great improvement in health which has come to her sister Josie. she was taken to a Hospital and the morphine taken from her and some operation performed upon her, so that now she is so much better that she could not only can for herself but for her husband also, who has been quite sick, and her letters seem like her own self again. How thankful she must be! Wallace Locke came in this P.M. He came up to look after the various pieces of property here - found that that gale [?] great havoc with windmills, &.c. The windmill wheel at the Guernsey place, belonging to Sarah, went all to pieces. At the Gordon place the Windmill, wheel, tower, pump and all, turned a complete summersault over the tank and piled in a heap. Then he went to his own house to get some clothing from the boxes where they were packed and when he opened them, the mice scampered in all directions, and he found the clothing, sofa pillows, &.c. completely riddled by the mice. So he telephoned to Maud to come and help him repack them. (T.S.R. 35. 2 P.M. 55. S.S. 50.)

Mar. 26. Wednesday. North windy. Received letters from Willie, Ida and Will Cooke and wrote to Geo. Robert has got badly poisoned with poison oak so that his eyes are closed, and Ada is suffering from toothache in a tooth the dentist had crowned, and had gone to Oakland to get it fixed. Theresa received a paper from Maud Piper containing an obituary notice of John Thompson, her husband, who died on the 3rd inst. of consumption, at the age of 25, leaving her a widow with her babe of 9 mos. Theresa by name.