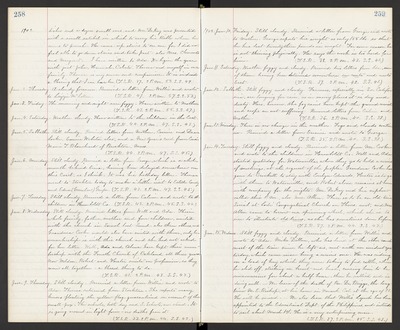 1902. dishes and a dozen small ones, and Mr. DeKay was presented with a small satchel in which to carry his Bible when he comes to preach. He came up stairs to see me for I did not feel able to go down stairs and take part - also Mrs. Clements and Margaret. I have written to Ada. We begin the year with just John, Hannah, Celeste. Theresa and myself in our family. Theresa is my nurse and companion. It is indeed a blessing that I can have her. (T.S.R. 37. 2 P.M. 53. S.S. 49.)

Jan. 6. Monday. Still cloudy. Received a letter from George, which is a whole month behind time, having been delayed somewhere on this Coast, as I think. It was his birthday letter. Theresa went to Stockton today to make a little visit to Estelle Candy and Edna (Greenlaw) Grupe. (T.S.R. 43. 2 P.M. 47. S.S. 45.)

Jan. 8. Wednesday. Still cloudy. Received letters from Will and Ada. Their whole family, father, mother and four children, united with the church in Sunol last Sund. also three others, and Grandma Cooke would also have united with them, only he - membership is with this church and she had not asked for her letter. Will, Ada and Alma have kept their membership with the Fourth Church of Oakland all those years. Now Weldon, Robert and Hester unite on profession, so they come all together - a blessed thing to do. (T.S.R. 41. 2 P.M. 43. S.S. 43.)

Jan. 9. Thursday. Still cloudy. Received a letter from Willie and wrote to Ada. Theresa returned from Stockton. She reports many houses floating the yellow flag, quarantined on account of the small-pox. The schools, both day and S. Schools, are closed. It is going around in light form - no deaths from it. (T.S.R. 33. 2 P.M. 44. S.S. 42.)

Jan. 12. Sabbath. Still foggy and cloudy. Farmers, especially in So. California, are longing for rain, as in many places it is dry and dusty. Here, however, the fog rains have kept the ground moist and crops are not suffering. Received letters from Calvin and Mother. (T.S.R. 36. 2 P.M. 40. S.S. 38.)

Jan. 14. Tuesday. Still foggy and cloudy. Received a letter from Mr. Cooke and wrote to the children in Humboldt Co. Will and Ada started yesterday for Watsonville, where they go to hold a series of meetings, at the request of the people. Grandma Cooke has gone to Crockett to stay with Evelyn Edwards, Hester is to go with them to Watsonville, and Robert alone remains at home with company for the nights. Mr. DeKay and his nephew called this P.M., also Mrs. Allen. There is to be an old-time Social at Lodi Congregational Church on Thurs. next, and Mrs. Allen came to borrow our spinning wheel, which she is to use to illustrate old times, as she has sometimes done before. (T.S.R. 37. 2 P.M. 44. S.S. 43.)

Jan. 15. Wednes. Still foggy and cloudy. Received a letter from Willie and wrote to Ada. Mike Dillon, who has lived at the other ranch most of the time since he left us, met with an accident yesterday, which came near being a serious one. He was riding on a load of hay which they were taking to feed cattle, when he slid off, striking on breast and head, causing him to be unconscious for about a half hour - there he rallied and is doing well. We learn of the death of Rev. Dr. Briggs, the long-time M.E. Bishop, at his home in Newark, Cal. at the age of 81. He will be missed. We also learn that Willis Lynch has been appointed to the Educational Dept. of the Philippines, and intends to sail about March 1st. He is a very enterprising man. (T.S.R. 37. 2 P.M. 45. S.S. 43.)