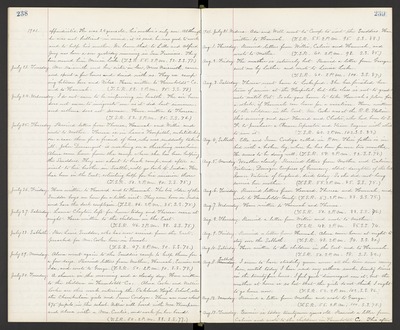 1901. appendicitis. He was 24 years old, his mother's only son. Although he was not brilliant in mind, it is said he was good to work and to help his mother. We learn that to Lilla and Alfred Jory was born a son yesterday morning in San Francisco. They have named him Merwin Locke. (T.S.R. 55. 2 P.M. 92. S.S. 77.)

July 25. Thursday. Received letters from Theresa, Hannah and Willie and wrote to Mother. Theresa is in Lane's Hospital, substituting on a case there for a friend of hers, who has suddenly taken ill. John Demangeot is working on a threshing machine. Alma came home from the camp where she has been helping the Scudders. They are about to break camp, and after a visit to his brother in Seattle, will go back to India. He has been in the East, soliciting help for his mission there. (T.S.R. 50. 2 P.M. 90. S.S. 75.)

July 30. Tuesday. A shower in the morning and a cloudy day. Have written to the children in Humboldt Co. Alma Cooke and Nellie Locke are this week entering the Oakland High School, also the Chamberlain girls and Irene Cordoza. There are now about 875 pupils in the school. Nellie will board with Mrs. Thompson and Alma with a Mrs. Curtis, and work for her board. (T.S.R. 50. 2 P.M. 88. S.S. 77.)

Aug. 3. Saturday. Theresa went home to Lockeford. She has finished her term of service at the Hospital, but the class is not to graduate until Oct. So she goes home to take Hannah's place for a while, if Hannah can leave for a vacation. Have written to the children in the East. Mr. Cooke was at the R.R. Station this evening and saw Howard and Chester, who had been to S.F. to purchase a Cream Separator and Steam Engine with which to run it. (T.S.R. 60. 2 P.M. 102. S.S. 83.)

Aug. 11. Sabbath. I seem to have steadily grown worse all the time since coming here, until today I have used my asthma smoke twenty times in the twentyfour hours. I feel quite discouraged over it, but the weather at home is so hot that the girls do not think I ought to go home now. (T.S.R. 52. 2 P.M. 102. S.S. 86.)

Aug. 13. Tuesday. Eunice is today twentyseven years old. Received a letter from Calvin and wrote to the children in Humboldt Co. This afternoon