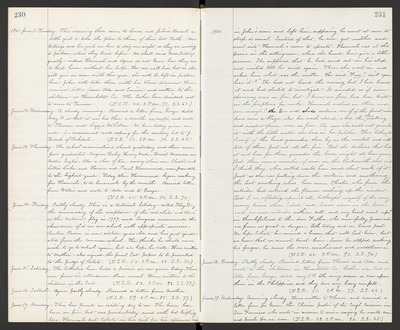 1901. June 11. Tuesday. This morning there came to Laura and Julius Bruml a little girl to take the place to them of their last Ruth. Mrs. Billings and her girls are here to stay over night, as they are moving to Jackson, where they lived before. We shall miss Mrs. Billings greatly - indeed Hannah and Agnes do not know how they are to keep house without her help. Her cow will live, but as she will give no more milk this year, she will be left in pasture here. John will take them with his team tomorrow. Have received letters from Ida and Eunice and written to the children in Humboldt Co. The Cookes have decided not to move to Tacoma. (T.S.R. 44. 2 P.M. 77. S.S. 65.)

June 12. Wednesday. A cloudy morning. Received a letter from George dated May 13, so that it was less than a month en route, and wrote to Theresa and Lizzie McLellan. We have today given our order for monument and coping for the cemetery lot to J. Busch of Oakdale. (T.S.R. 50. 2 P.M. 74. S.S. 65.)

June 13. Thursday. The school examinations closed yesterday and there were four graduates. Eugene Daley, Henry Wade, Daniel Marceau and Nellie Inglis. Also a class of ten, among whom are Chester and Lottie Locke and Horace and Pearl Hammond, were promoted to the highest grade. Today Alice Hammond began working for Hannah, to do housework by the month. Received letter from Willie and wrote to Ada and to George. (T.S.R. 45. 2 P.M. 82. S.S. 70.)

June 14. Friday. Partly cloudy. This is a National holiday - called Flag Day the anniversary of the acceptance of the "red, white and blue" as the National flag in 1777, and Congress recommends the observance of it in our schools with appropriate exercises. Benton Pascoe is now sixteen years old and has just graduated from the Common school. He thinks he shall never wish to go to school again, but we hope he will. Have written to Mother - also signed the first Est. papers to be presented to the Judge of Probate. (T.S.R. 50. 2 P.M. 88. S.S. 74.)

June 17. Monday. This has proved an exciting day to us. The house has been on fire, but was providentially saved with but trifling loss. Hannah put Celeste in his crib for his afternoon nap

1901. in John's room and left him, supposing he went at once to sleep as usual. Instead of that, he rose, got matches and went into Hannah's room to operate. Hannah was at the Juan-s in the sitting room, when she heard him give a little scream. She supposed that he had cried out in his sleep and waited till he cried again. Then she went in and asked him what was the matter. He said, "Fire! don't you hear it?" She had not heard the roaring but I had heard it and had started to investigate. It sounded as if some chimney were on fire, but I knew no fires had been built in the fire places for weeks. Hannah rushed in there and sure enough! the lace and shade curtains one of the front windows were a-blaze, also her wash-stand, a box, the floor matting and window frame were on fire. She saw she could not quench it with the little water she had in her pitcher. Then bethought herself of the hand grenades close by on the mantel and with two of them put out all the fire. But she declares that had it not been for those grenades the house might all have gone. But there were a number of men in the blacksmith shop and I think they, when called, would have made short work of it. Just as she was pulling down the curtain and smothering the last smoking relies, here come Chester, who from the outside had noticed the flames rushing up the window. But I, in reflecting upon it all, bethought myself of the very many times when Celeste and I were alone in the house and no men outside within call, and my heart went up in thankfulness to the dear Father, who mercifully preserved us from so great a danger, both today and in times past. We hope Celeste has received a lesson that will last him, but we know that we cannot trust him. Since he stopped sucking his fingers, he seems the more mischievous and meddlesome. (T.S.R. 60. 2 P.M. 93. S.S. 74.)

June 18. Tuesday. Partly cloudy. Received letters from Theresa and Ada and wrote to the children in Humboldt Co. Luther also had a letter from George, dated May 5th. The rainy season is now upon them in the Philippines, and they have very heavy rainfall. (T.S.R. 51. 2 P.M. 77. S.S. 62.)

June 19. Wednesday. Morning cloudy. Have written to Theresa and received a letter from Jee Gam, the Chinese pastor of the Cong'l Mission in San Francisco who wrote in answer to mine saying he would come and preach for us soon. (T.S.R. 48. 2 P.M. 80. S.S. 65.)