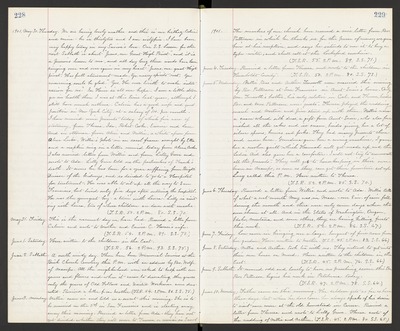 1901. May 30. Thursday. We are having lovely weather and this is our birthday - Calvin's and mine - he is thirtytwo and I am sixtyfive. I have been very happy today in my Savior's love. Our S.S. Lesson for the next Sabbath is about - "Jesus, our Great High Priest", and it is a precious lesson to me, and all day long these words have been singing over and over again in my heart "Jesus, our great High priest. Has full atonement made, Ye weary spirits rest, Ye mourning souls be glad." Yes, "He ever liveth to make intercession for us." In Him is all our hope. I am a little stronger in health than I was at this time last year, although I still have much asthma. Calvin has a good wife and good position in New York City, at a salary of $110. per month. I have received nine presents today of which five were of stationery, from Theresa, Ida, Robert Cooke, Eunice and Lou. And an ottoman from Alice and Nellie, a white apron from Alma Locke, Willie's photo in an casel frame wrought by Etta and a napkin ring in a letter received today from Alma Cooke. I also received letters from Willie and from Lilly Greve and wrote to Ada. Lilly Greve told us the particulars of Frank's death. It seems he has been for a year suffering from Bright's Disease of the kidneys, and so decided to go to a Hospital for treatment. He was able to sit up all the way to San Francisco, but lived only five days after entering the hospital. He was the youngest boy - a twin with Laura. Lilly is visiting with Laura, two of whose children are down with measles. (T.S.R. 50. 2 P.M. 80. S.S. 70.)

June 2. Sabbath. A north windy day. There have been Memorial Services at the Brick Church Cemetery this P.M. with an address by Rev. Wolfe of Acampo. All the neighborhood were asked to help with ever greens and flowers and when it came to decorating the graves only the graves of Odd Fellows and United Workmen were decorated. Received a letter from Mother. (T.S.R. 54. 2 P.M. 86. S.S. 75.)

June 3. Monday. Nettie came in and told us a secret this morning. She is to be married on the 5th in San Francisco and is starting away away this morning. Received a letter from Ada - they have not yet decided whether they will move to Tacoma or remain in Sunol.

1901. The members of our church have received a nice letter from Rev. Patterson in which he thanks us for the purse of money we gave him at his reception, and says he intends to use it to buy a type-writer, and shall call it the Lockeford machine. (T.S.R. 55. 2 P.M. 89. S.S. 71.)

June 5. Wednesday. Nettie Ross and Arthur Truscott were married this evening by Rev. Patterson at San Francisco in Aunt Susie's house. Only Mr. Truscott's brother, his only relative in Cal. and Theresa, besides Rev. and Mrs. Patterson were guests. Theresa played the wedding march and Mertice and Jim stood up with them. Nettie wore a cream-colored silk dress, a gift from Aunt Susie, who also furnished all the cakes and ice cream, besides giving her a lot of silver spoons, knives and forks. They had many presents there and more here. Grandma gave her a sewing machine, I gave her a woolen quilt which Hannah will get made up, and the Ladies Aid also gave her a comforter. I will not try to enumerate all the presents. They will go to housekeeping in their own home in Acampo, as soon as they can get their furniture set up. Lucy called this P.M. Have written to Theresa. (T.S.R. 52. 2 P.M. 85. S.S. 70.)

June 6. Thursday. Received a letter from Willie and wrote to Ada. Willie tells of what a wet month May was in Mass. - over 8 in. of rain fell during the month and there were only seven days when the sun shine at all. And in the States of Washington, Oregon, Idaho, Montana and some others, they are having killing frosts this week. (T.S.R. 52. 2 P.M. 86. S.S. 67.)

June 10. Monday. Father came in this morning. He seldom gets as far as here these days, but when he does come he always speaks of his desire to visit once more at the old homestead in Carver. Received a letter from Theresa and wrote to Lilly Greve. Theresa wrote of the wedding of Nettie and Arthur. (T.S.R. 45. 2 P.M. 80. S.S. 65.)