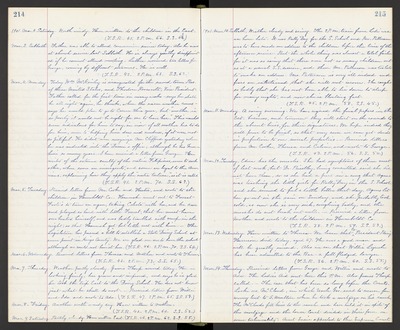 Mar. 4. Monday. Today Wm McKinley is inagurated for the second term Pres. of these United States, and Thodore Roosevelt, Vice President. Father called for the first time in many weeks - says he shall be all right again, he thinks, when the warm weather comes - says he would plan to go to Carver this year, but "mother is so poorly it would not be right for me to leave her." This would seem ridiculous for him to say, in view of all mother has to do for him, even to helping him dress and undress, if it were not so pitiful. He didnt even recornize Mr. Clifford yesterday when he was inducted into the Deacon's office office, although he has known him so may years. I have received a letter from George. He writes of the extreme cruelty of the native Filipinos, even to each other, where some are insurgents, and some are loyal to the Americans, explaining how they apply the "water torture", as it is called. (T.S.R. 41 2 P.M. 70. S.S. 63.)

Mar. 5. Tuesday. Received letters from Mr. Cooke and Hester, and wrote to the children in Humboldt Co. Hannah went out to Forrest Foote's to tune an organ, taking Celesta with her, and he ran and played so hard with little Forrest, that he must have over heated himself, and was badly troubled with croup in the night, so that Hannah got but little rest with him. The Legislature has passed a bill to establish a State Dairy School at some point in Kings County. We are glad we are to have the school although we could not have it here. (T.S.R. 46. 2 P.M. 70. S.S. 64.)

Mar. 7. Thursday. Weather partly cloudy. James Thorp arrived today. He is looking finely, has grown and improved, and says he is glad he took the trip East to the Dairy School. He does not know just what he shall do next. Received letters from Willie and Ida and wrote to Ada. (T.S.R. 47. 2 P.M. 65. S.S. 58.)

1901. Mar. 10. Sabbath. Weather cloudy and rainy. The 2 P.M. train from Lodi was an hour late. It was Rally Day for the S. School and Rev. Patterson was to have made an address to the children before the time of the afternoon service. But the whole thing was almost a total failure for it was so rainy that there were not as many children out as at a usual S.S. session, and then Mr. Patterson was too late to make an address. Mrs. Patterson is very ill indeed and fears are entertained that she will not recovers. She coughs so badly that she has not been able to lie down to sleep for many nights, and now she is bloating fast. (T.S.R. 45. 2 P.M. 58. S.S. 45.)

Mar. 11. Monday. A rainy morning. We have signed the final papers in the Est. business, and tomorrow they will start on the rounds to the absent heirs, for their signatures. We hope indeed they will prove to be final, so that very soon we can get deeds in perfection to our several properties. Received letters from Mr. Cooke, Theresa and Calvin, and wrote to George. (T.S.R. 43. 2 P.M. 56. S.S. 50.)

Mar. 12. Tuesday. Edna has the measles. She had symptoms of them most of last week, but Dr. Priestley, being consulted said she did not have them, so as she had a part in a song that Agnes was teaching the little girls for Rally Day in the S. School, and she seemed to feel a little better that day. Agnes let her go out in the rain on Sunday, and she probably took cold, as now she is very sick, coughing badly, and the measles do not break out well. Received a letter from Mother and wrote to the children in Humboldt Co. (T.S.R. 38. 2 P.M. 59. S.S. 53.)

Mar. 14. Thursday. Received letters from George and Willie and wrote to Ada. The Ladies Aid met here this P.M. Also James Thorp called. The case that has been so long before the Courts. Locke vs. McCloud, in which Uncle Geo. sued to recover for money lent to S. Moulton when he took a mortgage on his ranch. The McClouds fell heirs to the ranch and have held it in spite of the mortgage and the lower Court decided in their favor on some technicality. Aunt Susie appealed to the Supreme Court