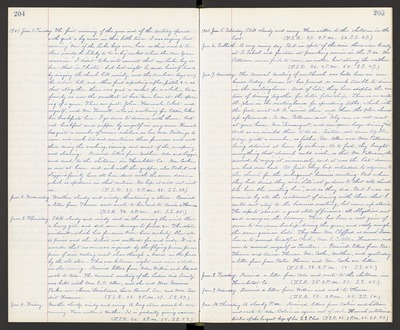 1901. Jan. 1. Tuesday. The first morning of the year and of the century opened with quite a big noise in this little town. I was saying last evening "now if the Locke boys were, here as there used to be, there would be likely to be a big racket when the New Year comes in." I didn't take into account that one Locke boy is here - that is, Chester - but last night he made himself heard by singing the church bell merrily, and the Ambrose boys rang the school bell, and others fired a repeating rifles, pistols, &.C. so that altogether there was quite a racket for a while. Our family is now the smallest it has ever been at the opening of a year. There are just, John, Hannah, Celeste and myself, and Mr. Truscott, who is working for Eddie, takes his breakfasts here. I go down to dinners with them, but eat breakfast and supper by myself in my room. Hannah has quite a number of music scholars, so has Mrs. Billings to come and work two and sometimes three forenoons each week, thus doing the washing, ironing and most of the sweeping and cleaning. Received letters from Mother, Ada and Lizzie, and wrote to the children in Humboldt co. Mr. Cooke is now at home and sick with the grippe, also Robert, and Lizzie's family have all been down with the same disease which is epidemic in that section. We hope it will not visit us. (T.S.R. 27. 2 P.M. 45. S.S. 43.)

Jan. 3. Thursday. Still cloudy and windy and in the evening the wind blew a heavy gale and did some damage to ferries, &.C. The store windmill, which has for some time been rickety, blew all to pieces and the debris was scattered far and wide. It is a wonder that no one was injured by the flying pieces, for one piece of iron casting went clear though a board in the fence by the old store. This was between eight and nine o'clock in the evening. Received letters from Ada, Willie and Ida and wrote to Ada. The Annual meeting of the Ladies Aid Society was held with Mrs. E.C. Allen, and she and Mrs. Minerva Parker were chosen Directresses, Laura Bruml, Sec. and Mrs. Condict Treasurer. (T.S.R. 43. 2 P.M. 47. S.S. 47.)

Jan. 7. Monday. The annual meeting of our Church was held here in our house today, because it has proved so much trouble to dine in the meeting house. And of late, they have adopted the custom of dining together for better fellowship. There is no suitable place in the meeting house for spreading tables, which, with the food, must all be carried there and then the place cleaned up afterwards. So Mr. Patterson said "Why can we not meet at your house, Mrs. Demangeot, and use your large dining room?" And so we invited them to do so. Sixteen sat down together today, quite a number, as father, Mr. Allen and Mrs. Patterson being detained at home by sickness. As to food, they brought everything that stomach could wish, so that Mr. Patterson, who seemed to enjoy it immensely, said it was the best dinner we had ever had. At first they had intended to adjourn to the church for the subsequent business meeting. But when they had dined they said, "Let's not go down to that cold church let's have the meeting here", and so they did. But I was so wearied by all the excitement of dining with them that I could not stay to the business meeting, but came up stairs. The reports showed a good state of finances - all obligations met and money in the treasury. There has been a net gain of seven to our membership during the year, and oddly enough, the same gain in Lodi. They chase Mr. Clifford as second Deacon Laura to succeed herself as Clerk, Mrs. E. C. Allen, Treasurer, and me to succeed myself as Trustee. Received letters from Bro. Horace and Anna, Theresa, Mr. Cooke, Mother, and yesterday a letter from Joan Bates. Horace and Mr. Cooke are better. (T.S.R. 38. 2 P.M. 50. S.S. 45.)