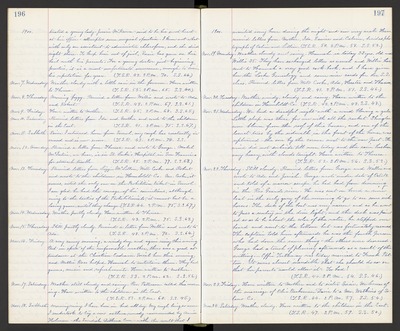 1900. treated a young lady - Jennie McKeown - said to be his sweetheart at his office - attempted some surgical operation. I know not what with only an assistant to administer chloroform, and she died right there. To keep him out of jail, Susie has gone on his bail with his parents. For a young doctor just beginning practice, it is a most unfortunate occurrence, enough to ruin his reputation for years. (T.S.R. 43. 2 P.M. 70. S.S. 66.)

Nov. 13. Tuesday. Received letters from Lizzie McLellan, Will Cooke and Robert and wrote to the children in Humboldt Co. Mr. Cooke, it seems, voted the only one on the Prohibition ticket in Sunol. I am glad he had the courage of his convictions, although owing to the tactics of the Prohibitionists, it cannot but be a losing game, until they change. (T.S.R. 44. 2 P.M. 75. S.S. 67.)

Nov. 16. Friday. A very rainy morning, a windy day, and again rainy this evening. But in spite of the unfavorable weather, there was a good attendance at the Christian Endeavor Social here this evening, and Netti Ross helped Hannah to entertain them. They had games, music and refreshments. Have written to Mother. (T.S.R. 53. 2 P.M. 62. S.S. 56.)

Nov. 18. Sabbath. Morning rainy. I have been in bed all day. My cough being so severe I undertook to try a new asthma remedy recommended by Annie Holman - the Swedish Asthma Cure - with the result that I

Nov. 19. Monday. Weather cloudy and rainy. Hannah is today 33 yrs. old and Willie 35. They have exchanged letters as usual and Willie has sent to Hannah a very good cook-book, and I have given her the "Locke Genealogy" and some nice cards for her S.S. class. Received letters from Will Cooke, Ada, Hester and Theresa. (T.S.R. 41. 2 P.M. 51. S.S. 46.)

Nov. 21. Wednesday. We had a dreadful night with a wind blowing a gale. Little sleep was there for me with all the racket. Shingles were blown from the roof of this house, and one of the locust trees by the sidewalk in the front of the house was upturned - the one by the corner next to the new part. The wind did not subside till noon today and the rain has been very heavy, with clouds tonight. Have written to Theresa. (T.S.R. 52. 2 P.M. 56. S.S. 52.)

Nov. 22. Thursday. Still cloudy. Received letters from George and Willie and wrote to Ada and Josiah. George wrote under date of Oct. 12 and told of a narrow escape he had had from drowning in the Rio Grande river. He was sent on board a river boat in the early grey of the morning to go to see some sick horses. The deck of the boat was very narrow and as he want to pass as sentry in the dim light, and the deck was painted so as to be about the color of the water, he stepped overboard and went to the bottom but was fortunately rescued. The captain told him afterwards he was the fourth person who had done the same thing - the others were drowned. George had a touch of pleurisy afterwards as result of the wetting. Effie Trethaway was today married to Frank Patton. It seems almost incredible that she should do so or that her parents would allow it. Too bad! (T.S.R. 44. 2 P.M. 54. S.S. 46.)