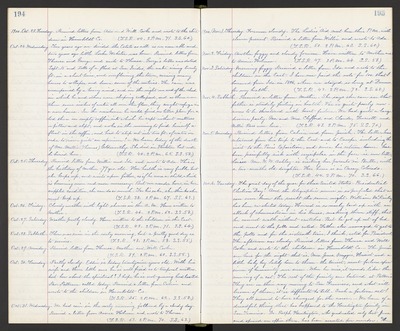 Oct. 24. Wednesday. Two years ago we divided the Estate as well as we were able and two years ago little Locke Webster was born. Received letters from Theresa and George and wrote to Theresa. George's letter was dated Sep. 15 and tells of a flood at San Isidro, the water rising twenty ft. in a short time, and overflowing the town, causing many houses to collapse and drown some of the natives. The rain was accompanied by a heavy wind, and in the night one end of the shed in which he and others were sleeping collapsed, and as there were then some inches of water all over the floor, they sought refuge in a warehouse. In the warehouse he could find no better place for a bed than an empty coffin, into which he crept without mattress or pillow and slept, and woke in the morning to find himself afloat in the coffin, and had to step out into two ft. of water in order to rise - quite an experience! We learn today of the death of Mrs. Mattie (Thomas) Goldsworthy. She died in Stockton but will be buried here. (T.S.R. 40. 2 P.M. 65. S.S. 58.)

Oct. 25. Thursday. Received letters from Willie and Ida and wrote to Ada. This is the birthday of Mother - 77yrs. old. Her health is very feeble but she keeps up, and waits upon father, as if he were a child, which is becoming more and more necessary. But we wonder how, in her crippled condition, she can do so much. For his sake, she thinks she must keep up. (T.S.R. 38. 2 P.M. 67. S.S. 63.)

Oct. 30. Tuesday. Partly cloudy. Eddie is today twentynine years old. With his wife and three little ones he is well fixed as to temporal matters, but how about the spiritual? I hope he is not growing hard hearted. Rev. Patterson called today. Received a letter from Calvin and wrote to the children in Humboldt Co. (T.S.R. 35. 2 P.M. 62. S.S. 58.)

Nov. 4. Sabbath. Received a letter from Mother. She says she can see that father is steadily failing in health. He is quite poorly now - seems to be threatened with heart failure. We had quite a large dinner party. Mr. and Mrs. Clifford and Claude, Truscott and Nettie Ross were here. (T.S.R. 43. 2 P.M. 75. S.S. 70.)

Nov.5. Monday. Received letters from Calvin and from Josiah. The latter has returned from his trip to the East and to Europe, including the visit to the Paris Exposition, and since his return home has been painfully sick with erysipelas in the face - is now better. Louise - Mrs. W.W. Ashley - is visiting her parents in Butte, with a two-months old daughter. Her home is in Ouray, Colorado. (T.S.R. 44. 2 P.M. 70. S.S. 66.)

Nov. 6. Tuesday. The great day of the year for these United States - Presidential Election Day! and the telegraphic service is so perfected that we can even know the result the same night. William McKinley has been re-elected today. Howard is so nearly laid up with an attack of rheumatism in his knees, making them stiff, that he cannot walk without crutches. But he got up out of bed and went to the polls and voted. Father also managed to get to the polls and for the sixteenth time, I think, voted for President. The afternoon was cloudy. Received letters from Theresa and Will Cooke and wrote to the children in Humboldt Co. The Jones's are here for the night - that is, Mrs. Jones, Maggie, Harriet and a little baby boy lately born to them - the tiniest, most forlorn specimen of humanity ever seen. When he cries, it sounds like the mewing of a cat. The rest of the family are bestowed at Patton's They are on their way moving to San Francisco, and what will become of them, it is difficult to tell. Such a forlorn set! They all seemed to have changed for the worse. We learn of a dreadful thing that has happened to the Huntington family in San Francisco. Dr. Ralph Huntington, who graduated only last June and opened an office there, has been arrested for murder. He