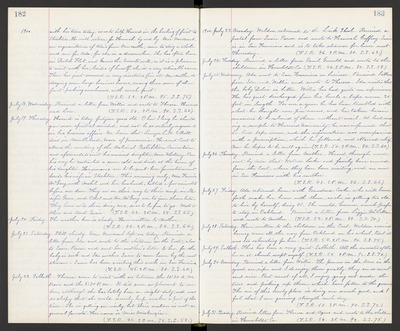 1900. with his team today, so as to help Howard in the hauling of fruit to Stockton. He will return for Hannah by and by. Mrs. Newcomb, an acquaintance of Ada's from Newcastle, came to stay a while and sew for Ada, for she is a dressmaker. She has often been in Dutch Flat, and knows the Smarts well, so it is a pleasure to visit with her, besides of herself, she is a very estimable woman. There has just occurred a very disastrous fire at Newcastle, destroying some large business houses, among them some of the fruit - packing warehouses, with much fruit. (T.S.R. 52. 2 P.M. 95. S.S. 75.)

July 19. Thursday. Howard is today fortyone years old. O how I long he should grow more spiritual minded, and not be so entirely engrossed in his business affairs. We learn that Lawyer L. W. Elliott died in Marblehead, Mass. of pneumonia. He went East to attend the meeting of the National Prohibition Convention and afterwards to visit his married daughter, Mrs. Whitney. On his way he contracted a severe cold and died at the home of his daughter. His remains are to be sent here for interment beside his wife in Stockton. This morning early, Mrs. Fannie McGary, with Mabel and her husband, halted a few minutes before our door. They are on their way to their camp in Pacific Grove, and Ethel and Mr. McGary are to join them later. They have sold their dairy cows, so as to be free to go. Wrote to Alice and Aunt Susie. (T.S.R. 48. 2 P.M. 88. S.S. 65.)

July 21. Saturday. Still cloudy. Mrs. Newcomb life us today. Received a letter from Ida and wrote to the children in the East, also to Susie Pascoe and sent her mother's letter to her, for the baby is sick and Ida wishes Susie to come home by the next steamer. Susie has been visiting this week in San Francisco. (T.S.R. 45. 2 P.M. 80. S.S. 60.)

July 25. Wednesday. Ada went to San Francisco on business. Received letters from Ida and Willie and wrote to Theresa. Ida writes that the baby Delia is better. Willie has had quite an experience. He has just discharged from his bowels a tape worm 20 feet in length. For over a year he has been troubled with what he thought were pin-worms, and has taken heroic measures to be relieved of them without avail. At last, sending a sample to Harvard University, he was informed that he had tape worm, and the information was accompanied with a prescription, which he followed and obtained relief. Now he hopes to be well again. (T.S.R. 50. 2 P.M. 84. S.S. 60.)

July 26. Thursday. Received a letter from Mother. Heard through word sent by Ada that Wallace Locke and family have arrived from the East, where they have been visiting, and are now in San Francisco with his mother. (T.S.R. 48. 2 P.M. 86. S.S. 66.)

July 27. Friday. Ada returned home with Grandma Cooke who will hence forth make her home with them, as she is getting too old to live by herself, being 81. She would, however, much prefer to stay in Oakland. Received a letter from Lizzie McLellan and wrote to Mother. (T.S.R. 52. 2 P.M. 88. S.S. 70.)

July 30. Monday. Received a letter from Willie. The prunes on the trees in the yard are ripe and I do enjoy them greatly, they are so sweet and nice. But most of all, I enjoy going out under the trees and picking up those which have fallen to the ground. The air of this lovely place is doing me much good, and I feel that I am gaining strength each day. (T.S.R. 55. 2 P.M. 90. S.S. 72.)