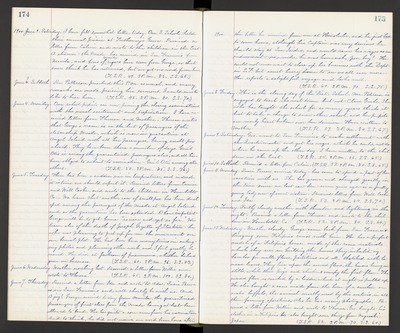 1900. June 2. Saturday. I have felt somewhat better today. Our S. School held their annual picnic at Tretheway's Grove. Received a letter from Calvin and wrote to the children in the East. A steamer - the meade - has arrived in San Francisco from manila, and boxes of Manila cigars have come from George, so that some think he has returned, but we get no word from him. (T.S.R. 42. 2 P.M. 82. S.S. 65.)

June 4. Monday. Our school pupils are now passing the closing examinations with the usual excitement and trepidation. I have received letters from Theresa and mother. Theresa writes that George's name is on the list of passengers of the steamship meade, which is now in quarantine at Angel Island with all her passengers, having small - pox aboard. They have been there a number of days. Gen'l Otis is among the quarantined passengers also, and all have been obliged to submit to vaccination - Gen'l Otis among the others. (T.S.R. 50. 2 P.M. 85. S.S. 76.)

June 5. Tuesday. There has been a sudden rise in temperature, and indeed it is time we should expect it. Received letters from Eunice and Will Cooke, and wrote to the children in Humboldt Co. - We learn that another case of small pox has been developed among the passengers of the meade at Angel Island and so the quarantine has been extended. O how impatient George will be to get home "so near and yet so far." We learn also of the death of Joseph Goyette of Stockton - he who was planning to put up for me the monument on our burial plot. He had been here many times in enlarging photos and planning other work and I feel greatly bereaved. He died at Jackson of pneumonia, whither he had gone on business. (T.S.R. 60. 2 P.M. 96. S.S. 83.)

June 7. Thursday. Received a letter from Ida and wrote to Ada. Susie Pascoe is in San Francisco and will shortly be with us. And O joy! George arrived today from Manila, the quarantined passengers of first class from the Meade having at last been allowed to land. He has quite a sore arm from his vaccination. And to think, he did not receive one word from home after

1900. the letter he received from me at Honolulu, and he just had to come home, although his Captain was very desirous he should stay at San Isidro, and would raise his wages as an inducement. No wonder he was homesick, poor boy! He could not even wait to close up his business with the Dept. in S.F. but must hurry home to see us all once more. He reports a delightful voyage and looks well. (T.S.R. 60. 2 P.M. 90. S.S. 75.)

June 8. Friday. This is the closing day of the Dist. School. Mr. Petersen is engaged to teach the next term but not Clara Grubs. She who has thought the school for so many years thinks it best to take a change to some other school, and her pupils are nearly heart broken over her decision. Have written to mother. (T.S.R. 57. 2 P.M. 84. S.S. 67.)

June 13. Wednesday. Weather cloudy. George came back from San Francisco bringing some Filipino curios with him. He has a perfect model of a Filipino house made of the same materials which they use in building the houses they inhabit, [?] bamboo for walls, floors, partitions and all, thatched with banana leaves. They live upon the second floors, the houses being on stilts, white their pigs and chickens occupy the first floor. The second floor is reached by a ladder, which at night is pulled up. He also brought a cane made from the horn of a caribou or water buffalo, the animal mostly used by the natives in all their farming operations. Also he has many photographs. Received a letter from Willie and wrote to Theresa. Geo. brought his clothes in a Filipino box - also brought some things from Nagasaki, Japan. (T.S.R. 52. 2 P.M. 70. S.S. 60.)