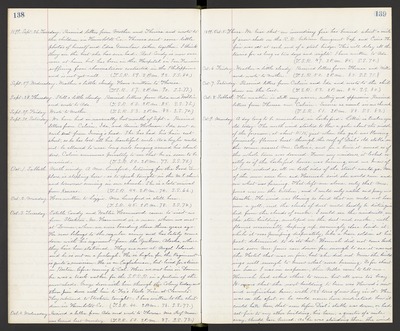 1899. Sept. 26. Tuesday. Received letters from Mother and Theresa and wrote to the children in Humboldt Co. - Theresa sent some little photos of herself and Edna Greenlaw taken together. I think they are the best she has ever had - Bert Condy is now once more at home but has been in the Hospital in San Francisco suffering from rheumatism contracted in the Philippines and is not yet well. (T.S.R. 59. 2 P.M. 92. S.S. 84.)

Sept. 30. Saturday. We have had an unusually hot month of Sept. - Received letters from Calvin, Ida, and Annie Holman. Ida sent a curl cert from Irving's head. She has had his hair cut short, so he has lost all his beautiful curls. As a boy, he could not be allowed to wear long curls hanging around his shoulders. Calvin announces privately to me that he is soon to be married. (T.S.R. 50. 2 P.M. 77. S.S. 73.)

Oct. 3. Tuesday. Estelle Condy and Walter Hammond came to visit us from Stockton. Mr. Hammond is a man whom we met at Donner, when we were boarding there three years ago. He now belongs to the regular army and has lately come down with his regiment from the Yukon, Alaska, where they have been stationed. They are now at Angel Island and he is out on a furlough. He is bugler for the Regiment - is quite a musician. He is an Englishman, but lived for a time in Boston, before coming to Cal. When we met him in Donner he was a track - walker for the S.P.R.R. in a portion of the snowsheds. George drove with him through the Colony today and then Jim drove with him to Fox's Stock Farm at Clements. They returned to Stockton tonight. - I Have written to the children in Humboldt Co. (T.S.R. 44. 2 P.M. 78. S.S. 77.)

Oct. 9. Monday. A day long to be remembered in Lockeford. Lottie is twelve yrs. old today. The worth wind started to blow a gale about the middle of the forenoon, at about 11:15, just when the gale was blowing furiously, flames burst through the roof of Dial's old stable, on the corner nearest Mrs. Cotton's, and for a time it seemed as if the whole town was doomed. From my windows, it looked exactly as if the Lockeford house was burning, and we knew if it were indeed so, all on both sides of the street would go. None of the men were here and Hannah said she would run and see what was burning. That left me alone, only that Mrs. Jones was in the kitchen, and I could only watch and pray and tremble. The wind was blowing so hard that we could not hear even a yell, and the clouds of dust could hardly be distinguished from the clouds of smoke. I Could see the windmill on the store building, enveloped in the dust and smoke, with flames occasionally leaping up. seemingly close beside it, while it was Jumping desperately, like a brave soldier at his post, determined to do its best. Hannah did not come back and soon Mrs. Jones ran down far enough to see it was not the Hotel that was on fire, but she did not know the buildings well enough to know what were burning. So far about an hour I was in suspense, then Nellie came to tell me. Hannah had asked others to come but all were too busy. It seems that the next building to burn was Howard's new and unfinished barn, with 125 tons of new hay in it. He was on the spot, or he could never have understood how it could have been, that even before Dial's stable was down, or had set fire to any other building, his barn, a quarter of a mile away, should have burned. As he was standing there, the wind