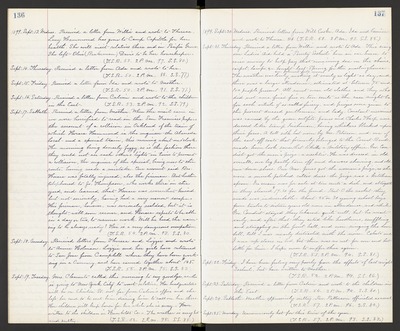 Sept. 17. Sabbath. Received a letter from Mother. When the mail came in we were horrified to read in the San Francisco papers the account of a collision in Oakland of the train of which Horace Hammond is the engineer - the Alameda Local - and a special train, this morning about one o'clock. The morning being densely foggy, as is the fashion there they could not see each other's lights in time to prevent a collision, the engineer of the special, being new to the route, having made a mistake. One account said Bro. Horace was fatally injured, also the fireman. But Luther telephoned to Jo. Thompson, who works there in the yard, and learned that Horace was somewhat bruised, but not seriously, having had a very narrow escape. His fireman, however, was seriously sealded, but it is thought, will soon recover, and Horace expects to be able in a day or two, to resume work. Will he heed the warning to be always ready? He's is a very dangerous occupation. (T.S.R. 54. 2 P.M. 93. S.S. 80.

Sept. 18. Monday. Received letters from Theresa and Lizzie and wrote to Annie Holman. Lizzie and her girls have returned to San Jose from Campbell where they have been working in a Cannery and have earned together about $125. (T.S.R. 55. 2 P.M. 95. S.S. 83.)

Sept. 19. Tuesday. Mrs. Clements called this morning to say goodbye, as she is going to New York City to visit relatives. Her headquarters will be on Clinton St. not far from Calvin's office and she left her card to be sent him, desiring him to call on her there. Her children will keep house for her while she is away. - Have written to the children in Humboldt Co. - The weather is very hot and sultry. (T.S.R. 52. 2 P.M. 95. S.S. 85.)

Sept. 21. Thursday. Received a letter from Willie and wrote to Ada. This evening our Ladie's Aid held a "Poverty - Soshul" here in our house to raise money to help pay that remaining due on the chairs, carpet, lamps, x.c. bought last Spring for the meeting house. The Weather was lovely an almost full moon making it nearly as light as day, and there was a large attendance, estimated at between 75 and 100 people present. All must wear old clothes and they who did not were fined five or ten cents as the case might be, for each article of so - called finery, and prizes were given to the poorest dressed gentlemen and lady. Constant merrimont was caused by the green outfits. James and Charles Thorp were dressed like tramp Irishman, having whiskers blocked upon their faces. A tall silk hat worn by Mr. Peterson, and one of the cast - off coats that formerly belonged to the Cornet Band, made him look somewhat like a military officer. Geo. Condict got the men's prize - a necktie. He was dressed in old overalls, one leg partly torn off and drawers showing, and old run - down shoes. Our Mrs. Jones got the woman's prize, as she wore a much - patched caltio dress - the prize was a kitchen apron. Ice cream was for sale at ten cents a dish, and altogether they cleared $17.30 for the fund. But O the racket they made was indescribable. About 25 or 30 young school boys from twelve to sixteen years old were in attendance, and while Geo. Condict stayed they behaved quite well, but he went early, and after that they acted like hoodlums, scuffling and struggling in the frout hall, and even ringing the door bell, till I was nearly distracted with the noise. Celeste and I were up stairs in bed, but there was no rest for me and but little for him. I hope never to suffer thus again. (T.S.R. 53. 2 P.M. 94. S.S. 81.)