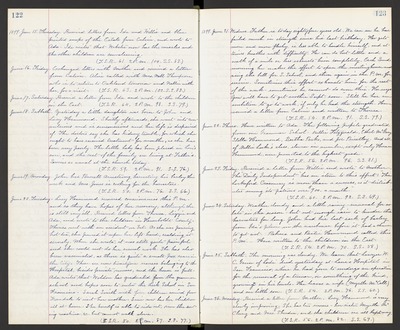 June 18. Sabbath. Yesterday a little daughter was born to John and Lucy Hammond. Shortly afterwards, she went into convulsions and is unconscious and her life is despaired of. The doctors say she has kidney trouble, for which she ought to have received treatment for months, as she has been very poorly. The little baby has been placed in Lou's care, and the rest of the family are living at Father's. Services as usual at the church today. (T.S.R. 59. 2 P.M. 91. S.S. 76.)

June 20. Tuesday. Lucy Hammond recovered consciousness this P.M. and so they have hopes of her recovery, although she is still very ill. Received letters from Theresa, Lizzie and Ada, and wrote to the children in Humboldt County. Theresa met with an accident on Sat. As she was pouring hot tea. she poured it upon her left hand. scalding it severely. When she wrote, it was still quite painful and she could not do her usual work. She has also been vaccinated, as there is quite a small pox scare in the City. There are now twenty one nurses belonging to the Hospital, besides private nurses, and the house is full. Ada writes that Weldon has graduated from the grammar school and hopes soon to enter the Lick School in San Francisco. Sarah Smith with four children arrived from Ferndale to visit her mother. Susie now has her children all at home. She herself is able to ride out, run the sewing machine, x.c. but cannot walk alone. (T.S.R. 50. 2 P.M. 87. S.S. 77.)

1899. June 21. Wednesday. Father is today eighty four years old. We can see he has failed much in strength since his last birthday. He gets more and more fleshy, is less able to handle himself, and at times breathes with difficulty. he can do but little and a walk of a mile or less exhausts him completely. Each Sund. morning he makes the effort to open the meeting house and ring the bell for S. School, and then again in the P.M. for service. Sometimes this effort exhausts him for the rest of the week, sometimes he cannot do even this. He says "You will have to get another Supt. soon." Still he has an ambition to go to work, if only he had the strength. Have received a letter from Calvin and written to Theresa. (T.S.R. 54. 2 P.M. 91. S.S. 79.)

June 22. Thurs. Have written to Ada. The following pupils graduated from our Grammar School, Nellie Fitzgerald, Ethel McGary Stella Hammond, Bertha Parks, and Joe Priestley. And all of Nellie Locke's class, eleven in number, except only Horace Hammond, were promoted to the highest grade. (T.S.R. 56. 2 P.M. 96. S.S. 81.)

June 24. Saturday. Weather cloudy and a little rainy, unusual for so late in the season, but not enough rain to hinder the harvesters for long. John had his last sack of barley from Ida's place in the warehouse before it had a chance to get wet. Rebecca and Bertie Hammond called this P.M. Have written to the children in the East. (T.S.R. 54. 2 P.M. 70. S.S. 58.)

June 25. Sabbath. The morning was cloudy. We learn that Lawyer W. C. Green of Lodi died yesterday at Lane's Hospital in San Francisco, where he had gone to undergo an operation for the removal of a turner, or something of the kind, growing in his bowels. He leaves a wife (Myrtle McCall) and one little son. (T.S.R. 54. 2 P.M. 76. S.S. 60.)