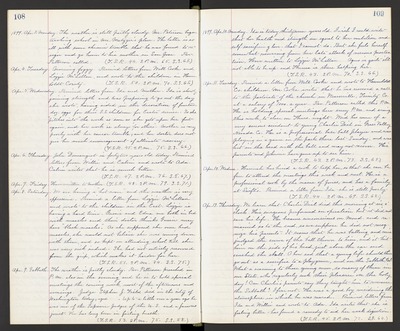 Apr. 5. Wednesday. Received letters from Ida and Mother. Ida is slowly gaining strength and was proposing to go out the day she wrote, having aided in the decoration of fourteen doz. eggs for their S.S. children for Easter service. So she "pitches into" the work as soon as she gets upon her feet again, and her work is always "for others". Mother is very poorly with her cancer trouble, and her doctor does not give her much encouragement of ultimate recovery. (T.S.R. 45. 2 P.M. 75. S.S. 66.)

Apr. 8. Saturday. We are having a "hot wave" and the weather is very oppressive. Received a letter from Lizzie McLellan and wrote to the children in the East. Lizzie is having a hard time. Gussie and Edna are both in bed with measles and their doctor thinks Gussie may have "black measles." As she supposed she once had measles, she would not believe she was coming down with them, and so kept on attending school till she was very sick indeed. She had not entirely recovered from the grip, which makes it harder for her. (T.S.R. 51. 2 P.M. 84. S.S. 75.)

Apr. 9. Sabbath. The weather is partly cloudy. Rev. Patterson preached in P.M. also in the evening and he is to hold special meetings the coming week, most of the afternoons and evenings. Judge Stephen J. Field died in the city of Washington today, aged . Up to a little over a year ago he was one of the Supreme Judges of the U. S. and a famous jurist. He has long been in failing health. (T.S.R. 53. 2 P.M. 75. S.S. 58.)

1899. Apr. 10. Monday. Ida is today thirtyseven years old. I wish I could write that her health and strength are equal to her ambition and self sacrificing love that I cannot do. But she feels herself somewhat recovering from her late attack of nervous prostration. Have written to Lizzie McLellan. Agnes is quite ill not able to be up and Theresa is there helping her. (T.S.R. 43. 2 P.M. 70. S.S. 66.)

Apr. 11. Tuesday. Received a letter from Will Cooke and wrote to Humboldt Co. children. Mr. Cooke writes that he has received a call to the pastorate of the church in Weaverville, Trinity Co. at a salary of $1000. a yea. Rev. Patterson called this P.M. He is holding special meetings here every P.M. and evening this week, to close our Thurs. night. Word has come of a very serious accident to young Charlie Dial in Grass Valley Nevada Co. He is a professional base ball player and was playing in a game in the park there last Sunday, and was hit in the head with the ball and may not recover. His parents and Johnnie have gone up to see him. (T.S.R. 43. 2 P.M. 73. S.S. 63.)

Apr. 13. Thursday. We learn that Charlie Dial died this morning at six o'clock/ His surgeons performed on operation but it did not save his life. He became unconscious on Mond. and remained so to the end, so we suppose he did not recognize his parents. It seems that he was batting and misjudged the curve of the ball thrown to him, and it hit him on the side of his head, just above the ear and crushed the skull. O how sad that a young life should thus go out as a sacrifice to a play game, and on the Sabbath, too! What a warming to those young men, so many of them in our State, who regularly seek their pleasure on the holy day! Can Charlie's parents say they taught him to reverence the Sabbath? I fear not. He was a good boy considering the atmosphere in which he was reared. Received letters from Ida and Willie and wrote to Ada. Ida writes that she is feeling better has found a remedy to aid her weak digestion. (T.S.R. 45. 2 P.M. 72. S.S. 64.)