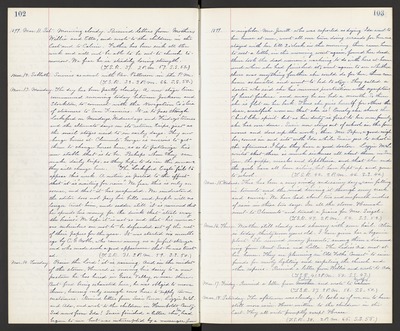 Mar. 13. Monday. The day has been partly cloudy. A new stage line commenced running today between Jackson and Stockton, to connect with the Navigation Co's line of steamers to San Francisco. It is to Pass through Lockeford on Mondays. Wednesdays and Fridays towards and the alternate days on its return trips, just as the mail stages used to in early days. They now change horses at Clements. George is anxious to get them to change horses here, so as to patronize his new stable that is to be. Perhaps when they can make daily trips, as they hope to do in the summer they will change here. The "Lockeford [?]" fails to appear this week. A notice is posted to the effect that it is waiting for rain". We fear this is only an excuse, and that it has suspended. We understand the editor does not pay his bills and people will no longer trust him, and sadder still it is rumored that he spends his money for the drink that "steals away the brains." We hope it is not so and that his numerous subscribers are not to be defended out of the rest of their papers for the year. It was started six months ago by C. G. Noble, who came among us a perfect stranger and who made such a good appearance that he was trusted. (T.S.R. 31. 2 P.M. 59. S.S. 50.)

Mar. 14. Tuesday. Praise the Lord ! it is raining. And in the midst of the storm, Howard is moving his dairy to a new pasture he has hired in Goose Valley, or near there. But feed being exhausted here, he was obliged to move them, leaving only enough cows here to supply town customers. Received letters from Susie Pascoe, Lizzie McL. and Ada, and wrote to the children in Humboldt County. Sad news from Ida ! Susie finished a letter she Ida had begun to me but was interrupted by a messenger from

1899. a neighbor Mrs. Jewett who was reported as dying. Ida went to her house at once, went all over town doing errands for her and stayed with her till 2 o'clock in the morning then came home to rest a little, in the morning went again, found her dead, then took the dead woman's washing to do with hers at home and when she had finished it, went again to see whither there was anything further she could do for her, then came home exhausted and went to bed to stay. They called a doctor who said she has "nervous prostration with symptoms of heart failure" and may be in bed a month. So there she is flat on her back. Thus she gives herself for others the dear, unselfish woman that she is! Surely she shows the Christ like spirit but as her duty is first to her own family she has over done. Susie now stays out of school in the forenoons and does up the work, then Mrs. Pape, a good neighbor, comes in and sits with Ida while Susie goes to school in the afternoons. I hope they have a good doctor. Lizzie McL. writes that there is much sickness all about them in San Jose, the grippe, measles and diphtheria, and that she and the girls have all been ailing, but have kept up and gone to school. (T.S.R. 42. 2 P.M. 46. S.S. 46.)

Mar. 15. Wednes. This has been a very windy and rainy day - rain falling in torrents and the wind driving it through every crack and crevice. We have had about two and one fourth inches of rain in these two days. In all the storm, Hannah went to Clements and tuned a piano for Mrs. Siegel. (T.S.R. 47. 2 P.M. 54. S.S. 52.)

Mar. 16. Thurs. Weather still cloudy and showery with some hail. Alice is today thirty seven years old. I have given her a begonia plant. She received many presents, among them a diamond ring from Aunt Susie and Lilla. The Ladies' Aid met at her house. They are planning an "Old Folks' Concert" to raise funds for newly lighting and carpeting the church and other repairs. Received a letter from Willie and wrote to Ada. (T.S.R. 41. 2 P.M. 50. S.S. 43.)