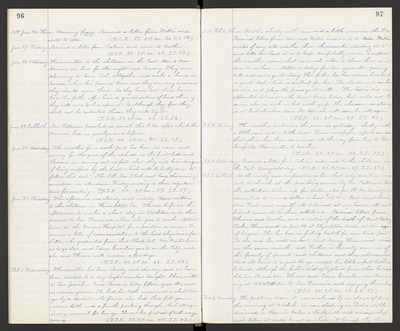 Jan. 28. Saturday. Have written to the children in the East. Mr. & Mrs. Minner are here for the night and Sunday. They are planning to leave Cal. altogether and make a home in Kansas, where his parents live, and they are very anxious they should move there. As they have lost their home here, his father offers him a quarter section of land there if they will come to live upon it. So although they fear they shall not be contented there, they will try it. (T.S.R. 37. 2 P.M. 62. S.S. 56.)

Jan. 30. Monday. The weather for a week past has been too warm and sunny for the good of the orchards, as the fruit buds and blossoms are coming out so fast that they will be in danger of being nipped by the frosts which will be pretty sure to follow this date. The Ell See Club met here this evening seventeen in attendance. Friday evening is their regular time for meeting. (T.S.R. 40. 2 P.M. 59. S.S. 57.)

Jan. 31. Tuesday. The afternoon was cloudy and windy. Have written to the children in Humboldt Co. Theresa left us this afternoon, to make a short stay in Stockton and then proceed to San Francisco, when she goes to make application to the Woman-s Hospital for a position as nurse. She carries a letter of recommendation to the head physician from Lilla, who graduated from that Hospital. Mrs. Winterburn is to go also, and Edna Greenlaw goes to see the City, and she and Theresa will remain a few days. (T.S.R. 42. 2 P.M. 66. S.S. 58.)

Feb. 1. Wednesday. The weather has been cloudy showery, and we have been treated to a very bright rainbow tonight. I have written to Bro. Josiah. Susie Pascoe is today fifteen years old, and is woman grown. She had her teeth examined a short time ago by a dentist, who found she had three full-grown wisdom teeth and a fourth pricking through, which all agree is very unusual for her age. She cut her first set of teeth very young. (T.S.R. 37. 2 P.M. 45. S.S. 43.)

1899. Feb. 2. Thurs. Weather cloudy with rain and a little snow in the P.M. Received letters from Ada and Willie and wrote to Ada. Willie writes of very cold weather there thermometer standing at 6 degrees - and tells how hard it is to keep comfortably warm. I suppose the weather seems about as much colder to them there as it does to us here. Nellie is today fourteen years old - growing tall and seems quite strong. Her father has her ride on horseback a great deal, which is excellent for her. She stands well in her studies and plays the piano quite well. The Ladies 'Aid was appointed to meet with Aunt Susie today, but could not be cause she is sick in bed with grip. She, who seems so strong is at last stricken down. We hope she will soon be well again. (T.S.R. 35. 2 P.M. 49. S.S. 40.)

Feb. 3. Friday. The weather continues the same as yesterday cloudy with a little rain and a little snow. From newspaper reports we see that there has been some snow all the way from here to Bakersfield. Have written to Mother. (T.S.R. 30. 2 P.M. 43. S.S. 39.)

Feb. 5. Sabbath. North windy and temperature so low that only seventeen were out to church at the preaching service by Rev. Patterson. But the collection taken up for pastor, also for H. M. Society, amounted to over a dollar a head - $17.25 But Aunt Susie, Mrs. Foote and myself, all detained at our homes, all sent liberal amounts to these collections. Received letters from Theresa and Mother, and a notice of the death of Aunt Betsey Parker Hammond on Jan. 28 at Plympton, Mass. at the age of 81 years. She has been in failing health for some time past. So she and her sister-in-law. Aunt Mary Hammond -died in the same month, and Father is the only survivor of the family of parents and children and those intermarried. And all lived to a good old age except his little infant brother Roland, although the father died of typhoid fever, when he was between 50 and 60. Theresa and Edna Greenlaw are boarding at 108 McAllister St. San Francisco, and enjoying themselves. (T.S.R. 25. 2 P.M. 43. S.S. 37.)

Feb. 6. Monday. The people on Main St. were awakened by an alarm of fire this morning at 4 o'clock. A man sleeping in Dial's stable discovered a blaze in Gehan's blacksmith and carriage shop and before it could be extinguished, it burned the floor