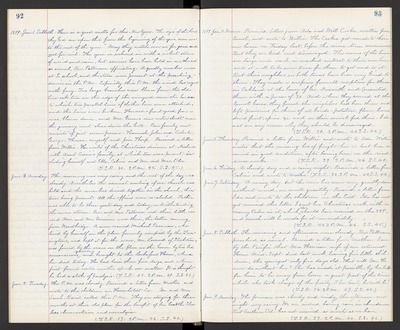 1899. Jan. 1. Sabbath. Here is a good motto for this New Year. The eyes of the Lord They God are upon the from the beginning of the year even unto the end of the year."May they watch over us for good and not for evil. The year is ushered in with a violent storm of wind and rain, but services have been held in our church as usual, Rev. Patterson officiating. A goodly number were at S. school, and thirteen were present at the preaching service in the P.M. Especially this P.M. the wind has raged with fury. Two large branches were blown from the old live oak tree in the edge of the vineyard near the house to which two parallel lines of clothes line were attached, and the lines were broken. Howard's front yard fence was blown down, and Mrs. Green's new water closet near the granary , went clear down the hill. Our family now consists of just seven person. Hannah, John and Celeste, George, Theresa, myself and Jim Thorp. Received a letter from Willie. He writes of the Christmas dinner at Nashua with Aunt Carrie's family, at which ten were present - including himself and Etta, Calvin and MR. and Mrs. Ober. (T.S.R. 40. 2 P.M. 45. S.S. 45.)

Jan. 2. Monday. The morning was very rainy and the rest of the day was cloudy. Nevertheless the annual meeting of our church was held and the members dined together in the church, thirteen being present. All the officers were re-elected. Father was able to be there yesterday and today, notwithstanding the severe storm. Rev. and Mrs. Patterson and their little one and Mrs. and Mr. Minner were there, the latter coming from Woodbridge. A man named Michael Brennan, who lived by himself on the place formerly occupied by the Farringtons, and kept it for the owner, MR. Leonard of Stockton, was found by the owner on the floor in the house by his bed unconscious yesterday and brought to the Lockeford House, where he died today. He had lain there five days, and when first found could neither speak nor swallow. It is thought he had a stroke of paralysis. (T.S.R. 43. 2 P.M. 49. S.S. 42.)

Jan. 3. Tuesday. The P.M. was cloudy. Received a letter from Mother and wrote to the children in Humboldt Co. Mr. and Mrs. Saml. Baird called this P.M. They are staying for three months at their old place for the benefit of her health. She has rheumatism and neuralgia. (T.S.R. 37. 2 P.M. 46. S.S. 40.)

1899. Jan. 4. Wednes. Received letter from Ada and Will Cooke, written from Sunol, and wrote to Willie. The Cookes got moved to their new home on Friday last, before the severe storm Commenced. But they are tired and discouraged. The rooms of the house are large and dark, in marked contrast to their own home and it will take some time for them to get used to it. But their neighbors in both towns have been very kind to them. They made a surprise farewell reception for them in Oakland at the house of Geo. Naismith, and presented them with a purse of $30. And when they arrived at the Sunol house, they found the neighbors had been there and left provisions for them of all kinds potatoes, flour, hams, dried fruit, spices, &c and on their arrival fed them. I do not see any reason why they should be discouraged. (T.S.R. 29. 2 P.M. 48. S.S. 42.)

Jan. 5. Thursday. Received a letter from Willie and wrote to Ada. Willie writes that the missing box of bright has at last been received in good condition, after having been on the road seven weeks. (T.S.R. 29. 2 P.M. 46. S.S. 40.)

Jan. 7. Saturday. A rainy day, but the rain has come very quietly down without wind, in small quantity. Received a letter from Ida and wrote to the children in the East. Ida has not yet received the letter I sent her Christmas week, with a Money Order in it, which she should have received on the 22nd, and search will be made for it immediately. (T.S.R. 40. 2 P.M. 46. S.S. 45.)

Jan. 8. Sabbath. The morning and afternoon were cloudy. Rev. Patterson preached as usual. Received a letter from Mother. I see by the Pacific that Mrs. Harrison , wife of our esteemed Home Miss. Supt. died last week, leaving five little children, the youngest only five days old. What will Mr. H. ever do without her? She has made it possible, by her help for him to be away from home a great part of the time while she took charge of the family. O how lonely he will be! (T.S.R. 36. 2 P.M. 47. S.S. 44.)