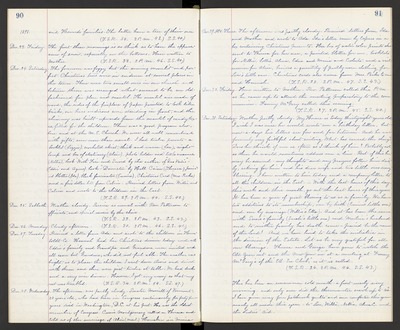 Dec. 24. Saturday. The forenoon was foggy but the evening moonlit and perfect. Christmas trees were in evidence at several places in the town. There were two small ones in our church and between them was arranged what seemed to be and oldfashioned fire-place and mantel. The mantel was made of wood, the sides of the fire place of paper painted to look like bricks, our brass andirons were standing in front, and the chimney was built upwards from the mantel of candy box is, filled for the children. There was a good program also, here and at the M.E. church. We were all well remembered with gifts, even more than usual. I had twelve presents - a booklet (Lizzie), crocheted skirt, thick and warm (Lou), night lamp and box of stationery (Alice). Photo holder and little creamer (Nellie), book -"With Fire and Sword" by the author of "Ius Vadis" (Eddie and Agnes) book "Deemster" by Hall Caine (Theresa) painted blotter (Ida), black fascinator (Eunice), Christmas Card (Mrs. Perks) and a five dollar bill from Calvin. Received letters from Willie and Calvin and wrote to the children in the East. (T.S.R. 29. 2 P.M. 44. S.S. 42.)

Dec. 27. Tuesday. Received a letter from Ada and wrote to the children in Humboldt Co. Hannah had her Christmas dinner today and all Eddie's family and Grandpa and Grandma were invited and all came but Grandma, who did not feel able. The weather was bright, so to please the children I went down stairs and dined with them and there were just twelve at table. We had ducks and a very nice dinner. However I got very weary so that my rest was troubled. (T.S.R. 34. 2 P.M. 54. S.S. 47.)

Dec. 28. Wednesday. The afternoon was partly cloudy. Senator Morrill of Vermont, 88 years old, who had been in Congress continuously for forty four years. died in Washington, D.C. at his post. He was the oldest number Congress. Carrie Montgomery called on Theresa and told us of the marriage of Alice (Mont.) Hamaker in Maine

Dec. 29. 1898. Thurs. The afternoon was partly cloudy. Received letters from Ida and Mother and wrote to Ada. Ida's letter came by Express in a box containing Christmas presents. Her box of water color paints she sent to Theresa for her use, a pointed blotter for me, booklets for Nellie, Lottie, Alma, Edna and Marie and Celeste, and a veil receiver for Alice, besides a quantity of partly worn clothing for Lou's little ones. Christmas Cards also came from Mrs. Perks to one and Hannah. (T.S.R. 28. 2 P.M. 47. S.S. 43.)

Dec. 31. Saturday. Weather partly cloudy. My Horace is today thirtyeight years old I wish I was sure he would write me as birthday letter , but now-a-days his letters are few and far between. And he was formerly very faithful about writing. What has caused the change. Does he think of me as often as I think of him? Probably not, as then he would sometimes address me a line. But of this he may be assured my thoughts and my prayers follow him daily, asking for him and his dear wife and two little ones every blessing. I have written to him today and a company letter to all the children in the East. With the last hours of this day, this week and this month, go out the last hours of the year. It has been a year of great blessing to us as a family. We have two additions to its membership, one by birth (Eunice's little one) and one by marriage (Willie's Etta). And it has been the same with Susie's family (Sarah's little one) and Mertice's husband and to neither family has death come praised be the name of the Lord! And we have lived to take the initiative in the division of the Estate. Let us be very grateful for all our blessings. Theresa and George have gone to "watch the Old year out and the New Year in "at a meeting at Fanny McGary's of the "Ell. See Club," as it is called. (T.S.R. 26. 2 P.M. 46. S.S. 43.)

This has been an uncommon cold month - a frost nearly every morning and only once did the thermometer crawl up to 60 degrees. I have given away four patchwork quilts and one comforter this year nearly all made this year to Lou, Willie, Nellie, Alma C. and the Ladies' Aid.